When I first started this blog, there were really only three people whose food writing I read consistently – Molly Wizenburg’s (Orangette), Luisa Weiss’ (The Wednesday Chef) and Rachel Roddy’s (Rachel Eats). Whether they were writing about braised artichokes, or ham-bone soup, or a meringue cake gone to hell, their prose seemed effortless and fluid, heartfelt, but never saccharine. In a sea of food-related sites getting louder by the minute, they quickly became a special trifecta to me. I liked that food was at the centre of their writing, but not its singular purpose. I also liked that they never fetishised food, a welcomed shift from the norm, where the entire culinary world – in print, online, in restaurants – seemed to be suffering from a severe bout of excess, obsessed with everything from molecular gastronomy and celebrity chefs, to cronuts and the latest trends in bacon.

Thankfully, Molly, Luisa and Rachel were there to balance things out. By making the story the priority – instead of food trends and culinary styling – they completely changed the way I saw food media. In fact, their writing and approach to food was the reason I started this blog, and the reason I still keep plugging away at it, four and a half years after fumbling through that first post.

I tried to remember all this in April, when I spent an entire lunch break with my finger hovering over the “send” button to sign up for this year’s edition of The Language of Food, a writing workshop led by two members of the trifecta – Rachel and Luisa – at the Anna Tasca Lanza Cooking School in Sicily. The workshop dovetailed so flawlessly with the things I loved most – food writing, cooking, edible gardens, Italy – it felt like it had been plucked from a dream. I had savings set aside and vacation time banked at work. I could go. There was nothing stopping me. But there was still a small voice at the back of my head that rumbled each time I’d entertain the idea of going. Should I really be taking this workshop? Can I justify doing this? What if my writing is terrible? What if Rachel and Luisa think I’m terrible?

Finally, on that lunch break in April, I got a grip and pressed “send”.

I can’t tell you how thankful I am for that moment. 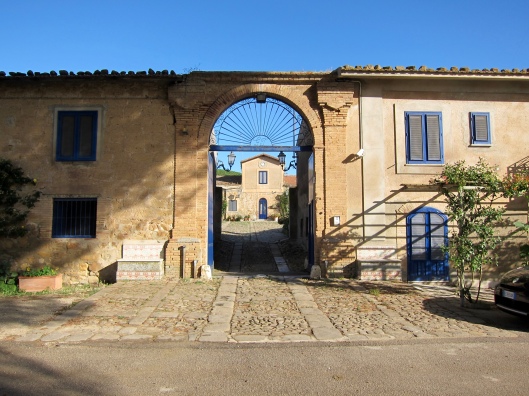 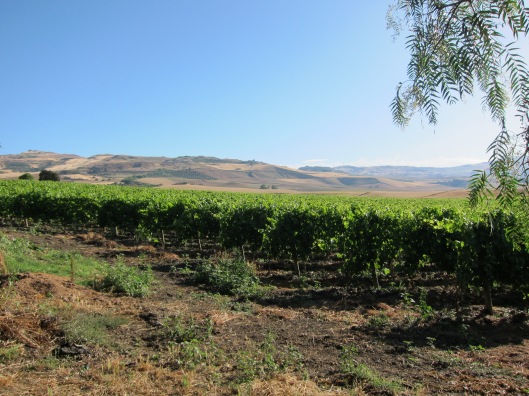 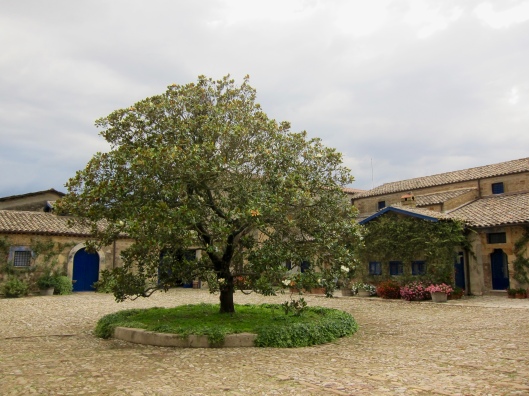 I arrived at the school in late June, after four days in Rome and one week in and around Palermo. Housed on the part of the property referred to as Case Vecchie, the school is run by Fabrizia Lanza, teacher, educator, and all-round force of nature who has become one of region’s most important proponents and protectors of Sicilian traditions, sustainable agriculture, and farm-to-table (or as she would call it, arm–to-table) living. I knew this woman was a phenom – that the breadth of what she’d taken on at her family’s estate was remarkable – but once meeting her, I also discovered that behind the illustrious persona was an exceedingly affable, delightful, lively woman who could put you in stiches with one wry, off-the-cuff comment. Knowing that she was going to be part of this week-long experience made me feel all the more lucky.

Throughout the first day, members of the workshop trickled in, some arriving from the UK, others from Berlin and the States, one originally from Victoria, BC, via Florence. We were a small group, nine in all, including Rachel and Luisa, a mix of former editors and journalists, published writers, and entrepreneurs. There seemed to be a collective giddiness about being there, all of us drawn to this one place, miles from home. It’s never a given that you’re going to get along with a group of strangers, especially when you teeter more toward introversion than extroversion, but it wasn’t long before I knew I was going to like our motley little crew. Nine women; nine eager souls, ready to soak it all in.

Over the course of the week, we read together, wrote together, and ate together; we chatted, strolled, exchanged stories, and wandered through the narrow paths of the garden, rubbing leaves between our fingers and lifting them to our noses; we visited the local shepherd and cheesemaker – Filippo – and watched him sculpt sheep’s milk into soft mounds of tuma – fresh, unsalted cheese made from the curds after they separate from the whey – before sitting down to a breakfast of homemade bread and jams and pecorino cheese. 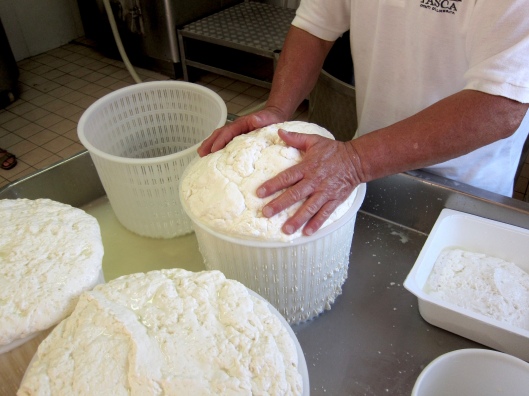 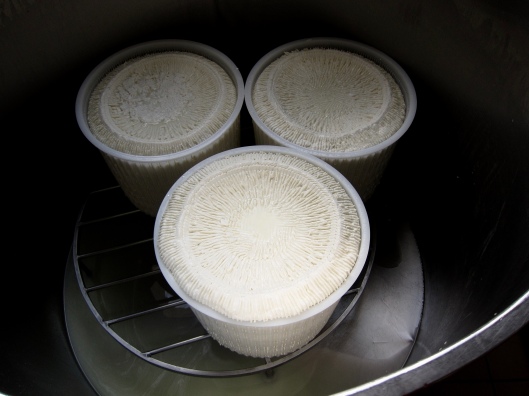 Between writing sessions, we explored the grounds, collecting vegetables from the garden and fruit from the small orchard to use in cooking lessons with Fabrizia, where we made ricotta gnocchi, ravioli, cavatelli, caponata, and sweets like sour cherry cake and cassata, a Sicilian dessert made with whipped ricotta, homemade marzipan, sponge cake and candied fruit. 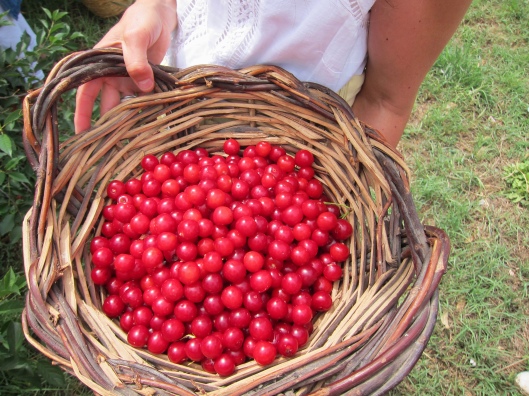 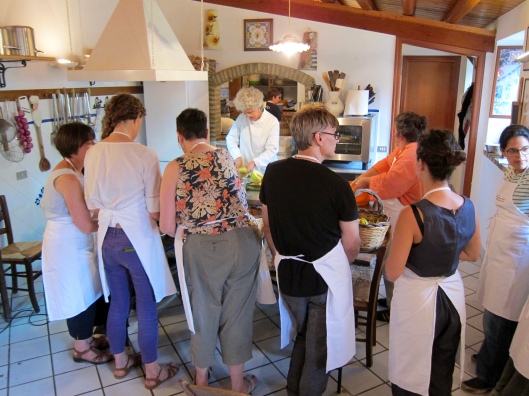 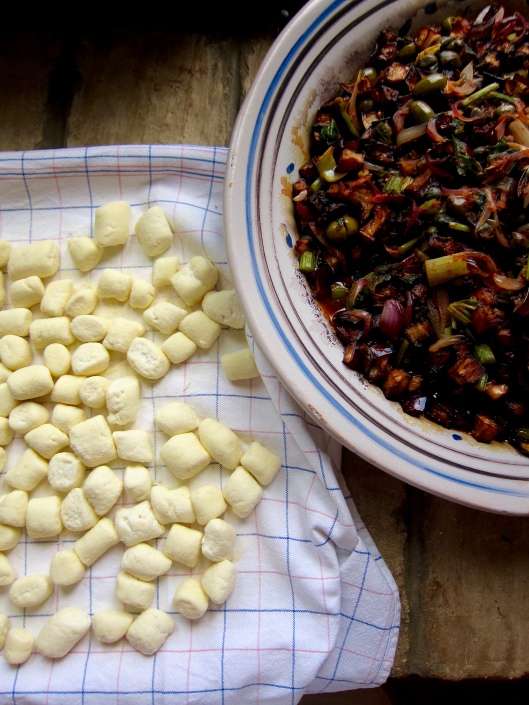 In the early evenings, at aperitivo hour, we’d gather around a table in the courtyard for platefuls of fried zucchini flowers, panelle, and cool glasses of sparkling wine, before convening around the dining table, usually adorned (to our collective delight) with one of Fabrizia’s vibrant wax print tablecloths.

The writing sessions were spaced out throughout each day. Often we’d sit around a big glass table, under the shade in the courtyard, or at the big wooden table in the library and read pieces selected by Rachel and Luisa – M.F.K Fisher, Molly O’Neil, Julian Barnes – before dicussing and then writing, pen to paper (not laptop).

I’d be lying if I said I wasn’t jittery at the start. The day I read my first piece aloud, my voice quivered so fiercely I wasn’t sure I’d be able to make it through to the end. The next few times, I felt that my writing was shit. Just total shit. Sometimes I shared, sometimes I didn’t. In a message to my boyfriend back home, I remember referring to it as paint-splatter writing – a mess of words thrown onto the page, without coherance, structure, or good diction. I felt embarrassed and ashamed that I’d come all this way and I wasn’t able to produce anything decent. You’re here with Rachel Roddy and Luisa Weiss! You’re in the middle of the Sicilian countryside! You’re surrounded by incredible, inspiring people! Write, goddammit! Write! But something inside me froze. I was like a deer in the headlights, incapable of letting the pen move across the page without inturrupting every second word.

It was only after a conversation with Rachel, about two days in, that I realised how much I was holding myself back, how being wracked with self-doubt was sabotaging my writing and, ultimately, the experience. I spent the rest of the week trying to quell those doubts, letting whatever came out to come out, without (too much) judgment or second-guessing. What emerged was the piece on street food in Sferracavallo that I slipped in at the end of my post on Palermo (scroll down to the last story here). Was it perfect? No. Was it complete? Not quite. But it was at least something – pieces of a puzzle that could be reworked, rearranged and smoothed out. It was perhaps the only piece that I approached with complete abandon and, lo and behold, it yielded results. I try to remind myself of that when I freeze up in front of a blank page (like, say, when I sat down to write this post).

This workshop taught me, amongst many other things, that writing – good writing – takes massive amounts of perseverance. It isn’t the kind of thing that falls into your lap through divine intervention. You can have ideas, thoughts, limitless sources of inspiration, but they remain disparate pieces until you choose to weave them together with words. And even then, those words will need your time and effort to become something beyond “paint splatter”, something that will make sense, set a tone, convey a story, and resonate with the reader.

To persevere, however, writers – amateur or otherwise – need to learn to cast aside their doubts. I never realised the extent to which my self-doubt was crippling my ability to write, and it was only in doing the workshop that it came into clear focus. I’ve started to apply an attitude of “get over yourself and get on with it” in moments when I catch myself hemming and hawing over a piece of writing. And I can tell you, adopting that attitude has been imperative in getting things onto the page. I definitely have Rachel and Luisa to thank for that.

In the process, I also learnt that when you’re feeling self-conscious about the work that you’ve done, there will always be people who’ll have more faith in your abilities than you do. I’m realising how imporant it is to listen to them, to trust their sincerity. They can sometimes see the good parts of yourself that you might not, at least in the moment, because they’re clouded in doubt. In other words, let them bolster you so that you can eventually bolster yourself.

When I try to write and then falter, I think about the things Rachel and Luisa taught us – about being daring, about being self-aware, about making the time to work on your writing whenever and however you can. I also think about something Fabrizia said at our last round-table, when we were discussing the workshop experience, including our initial apprehensions. She sat with us, listening and sketching watercolour zucchini flowers, before pausing to say, “But why all this fear? I don’t understand. Why?”

She was more or less saying, why let fear stop you? Why give it space? And she had a point. There’s no room for fear when there’s so much else to let in.

Big love to Rachel, Luisa, Fabrizia, and all the women of The Language of Food 2016. You are such wickedly smart, funny, warm human beings. If I could do it all over again, I would. A hundred times. x 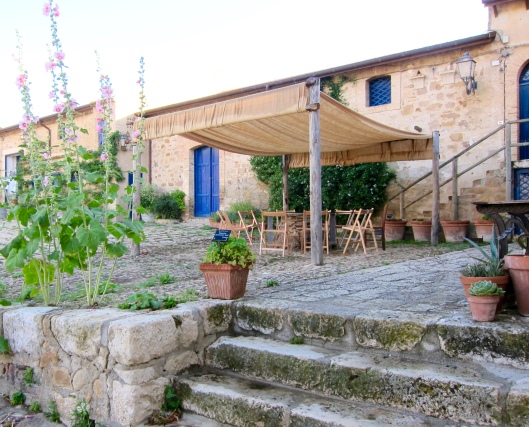