I was supposed to be sharing a cashew dipping sauce with you today. A really good one, at that. But rhubarb stole the limelight this week, showing up all over the place with its shockingly pink stems and massive, lush leaves fanning out like the feathers on a cabaret dancer. You can’t possibly say no to a vegetable that reminds you of a cabaret dancer, can you? I certainly can’t. Pretty rhubarb makes me go weak in the knees. 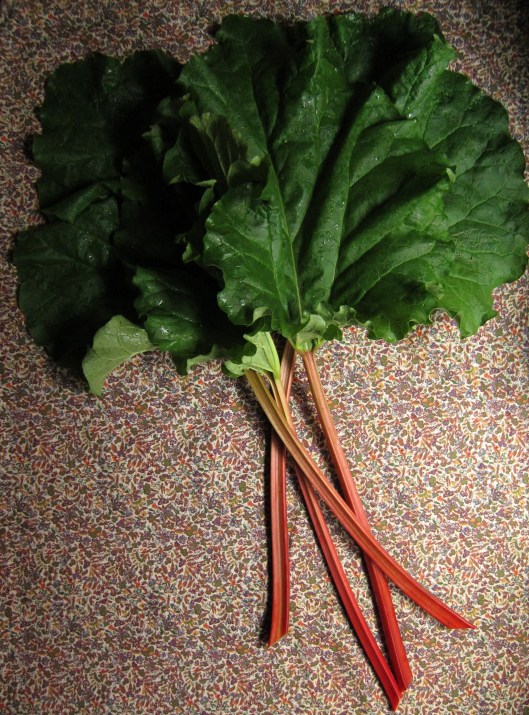 Like most things that only appear seasonally, rhubarb is one of those precious items you need to swipe up when you can, for however long you can. It’s appearance is sudden and ephemeral, only lasting a few weeks at the market in early summer. Then, the show’s over. The cabaret dancer goes home to rest until next year. It’s a fleeting affair, but all that more rewarding because of it. Knowing that you only have a small window of opportunity to enjoy rhubarb makes it a special, if not coveted, ingredient. This summer, I’ve been able to lay my hands on a considerable amount of home-grown rhubarb – some from the garden of my mom’s friend (hellooo, Lynn!) and some extracted from the little courtyard that sits between my building and the next one over. None of my neighbours seemed interested in it, so I helped myself to a few stalks. We’ll call it minimal urban landscaping. 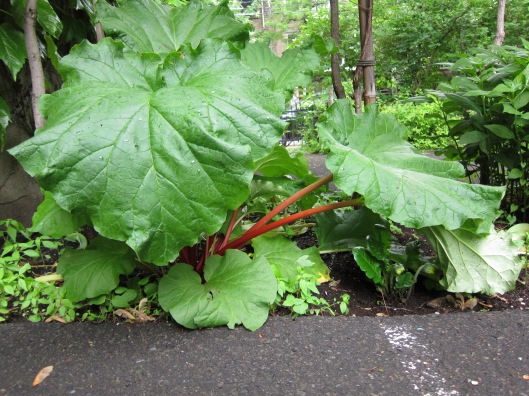 I did the first thing we all do with fresh rhubarb and made a crisp, one complete with the requisite strawberries, oats, walnuts and brown sugar. Nothing spectacular or exciting, but the fruit got nice and jammy after a long slow bake in the oven, blistering at the edges and spilling out at the sides. Crisps aren’t generally the most interesting of desserts, but I still make them from time to time. And when I get that first, still-warm mouthful of sweet-tart fruit with those crunchy, buttery oats, I’m reminded of how good crisps really are. Good in that wholesome, familiar, tuck-you-into-bed kind of way. 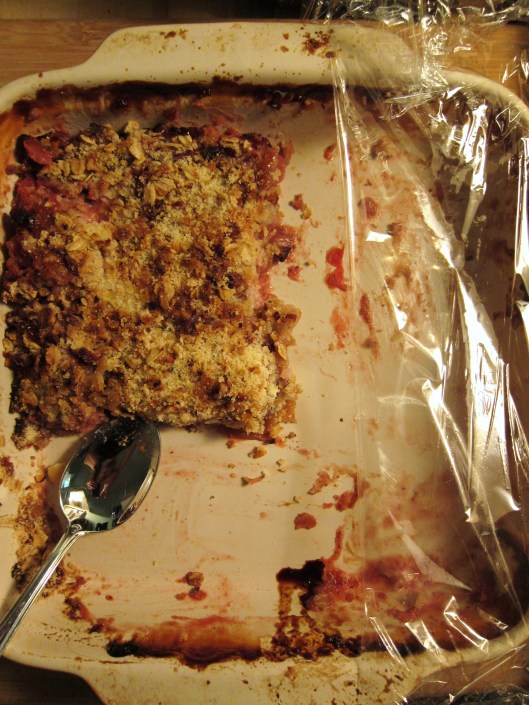 But because you’ve likely made a million crisps in your lifetime, and because I ate all of mine and forgot the measurements, there won’t be a crisp recipe here. Sorry. You’ll have to wing that one. There are, however, two other rhubarb recipes I can share with you, simply for the fact that I took notes and didn’t shove the whole thing in my face before taking photos. The first is a riff on a free-form crostata, where a quick rhubarb compote is topped with fresh strawberries, then wrapped in several layers of phyllo dough that have been sprinkled with crushed almonds and brushed with melted butter. There’s a bit of cinnamon, nutmeg and orange zest in there too, giving it both a bit of warmth (from the spices) and brightness (from the zest). And just when you start to think the whole thing is going taste like Christmas, there are those glorious, lightly cooked strawberries that crown the top, reminding you it’s summer. While there’s nothing groundbreaking about putting together strawberry and rhubarb, they do hum along quite nicely together and kick into peak season around the same time, making them a solid pair for balmy summer days. The use of phyllo here is nice too – it’s light and crispy and helps you avoid getting your hands mangled in a big wad of dough on a hot summer night.

The second is a savoury dish, where rhubarb is stewed on the stove top, then used as a braising base for chicken pieces. When the whole thing’s cooked, the stewed rhubarb mixture becomes the serving sauce. It’s from a New York Times recipe that I bookmarked and went digging for once I realized I’d barely made a dent in that stockpile of fresh rhubarb in my fridge. It’s a surprising recipe and one that hits the right notes – the tartness of rhubarb works well with the neutral flavours of the chicken and the addition of shallots, thyme and white wine give the sauce a very French-countryside vibe, which is always lovely. It’s definitely worth trying, especially if you’re bored with the idea of using rhubarb for something sweet. Remember, though, that since stewed rhubarb loses its pinkish hue and turns a colour closer to beige, it’s a good idea to sprinkle some vibrant garnishes (fresh thyme, sliced scallions) over top. Dress up the cabaret dancer, so to speak. Whatever you end up doing, go get yourself some rhubarb already! GO! Do it before it’s all gone and you find yourself on the kitchen floor crying big fat tears of regret. (Ok, I’m exaggerating. But still, go!)

Note to rhubarb virgins: here’s a nifty site I found covering all aspects of rhubarb, including rhubarb poison information (don’t eat the leaves!): 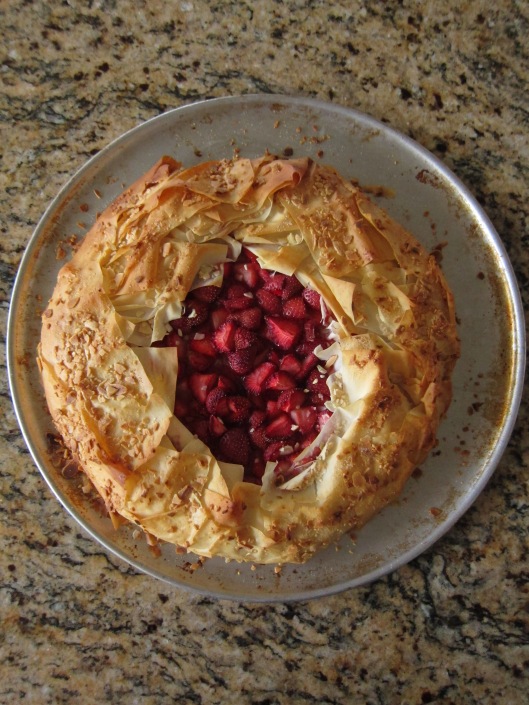 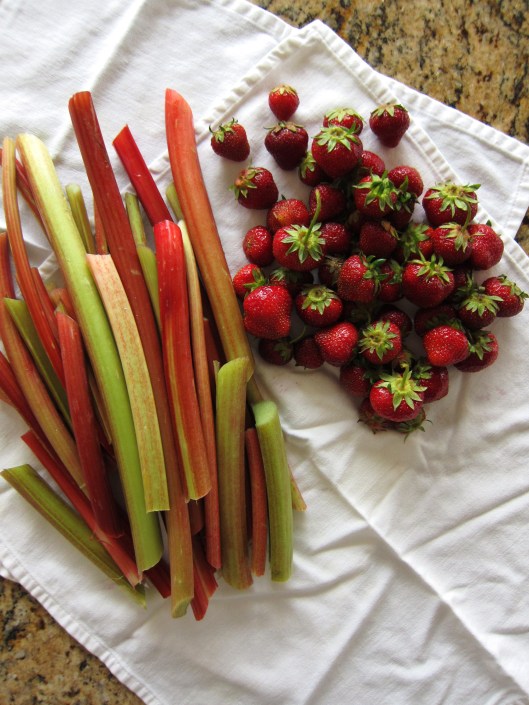 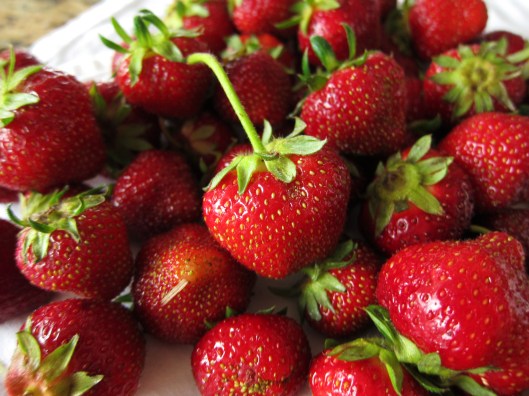 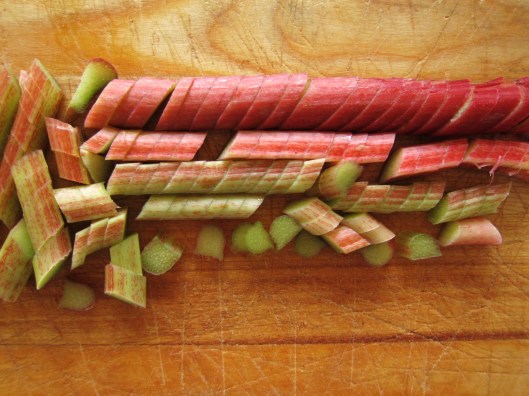 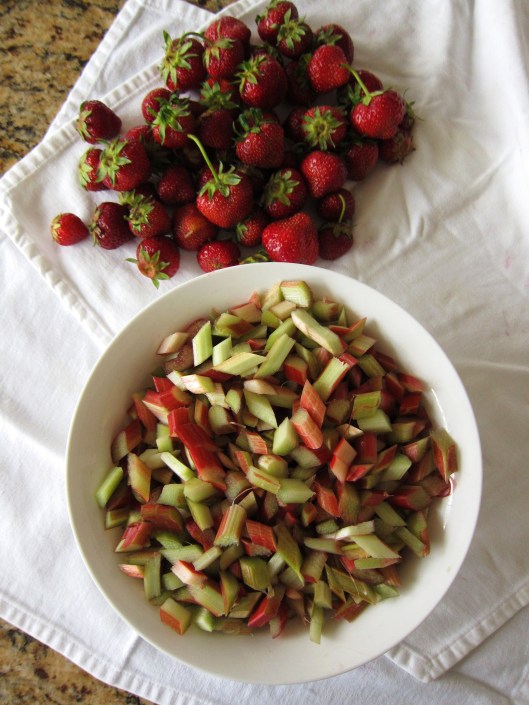 Directions: To prepare the filling: Place rhubarb, vanilla, orange rind, cinnamon, nutmeg and cloves in a pot to simmer over medium heat. Stir sugar with flour; stir into rhubarb mixture and cook, stirring often, until thickened (about 5 minutes). Let cool completely. (Can be made ahead and refrigerated for up to 3 days.) 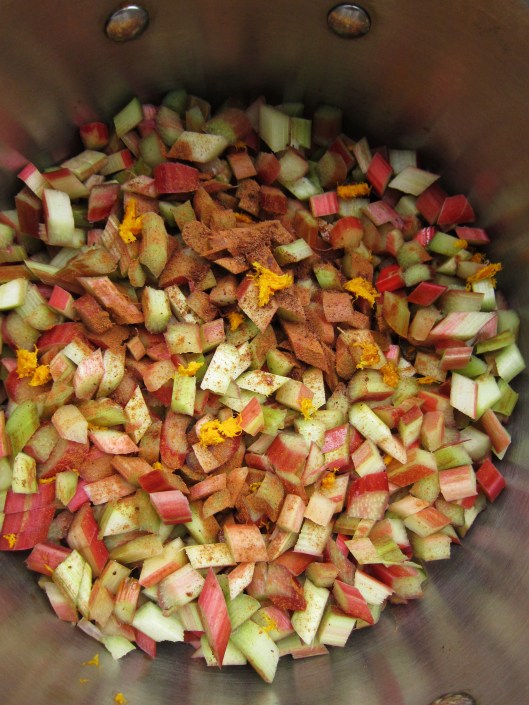 In small bowl, combine almonds, bread crumbs and sugar; set aside. Keeping remainder covered with damp towel to prevent drying out, lay 1 sheet of phyllo on greased 12-inch (30 cm) pizza pan, aligning 1 short end with inside edge of pan and letting other short end extend over opposite side. Brush entire sheet with some of the butter; sprinkle with 1 tbsp (15 mL) of the almond mixture. Lay second sheet at angle on top of first, overlapping by about 3 inches (8 cm); brush with butter and sprinkle with 1 tbsp (15 mL) more almond mixture. Repeat with remaining phyllo, overlapping and sprinkling with almond mixture between each and leaving equal overhang all around pan. 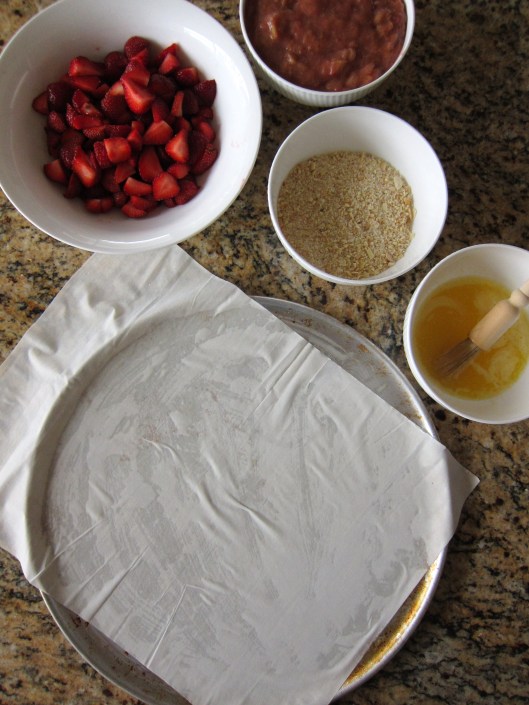 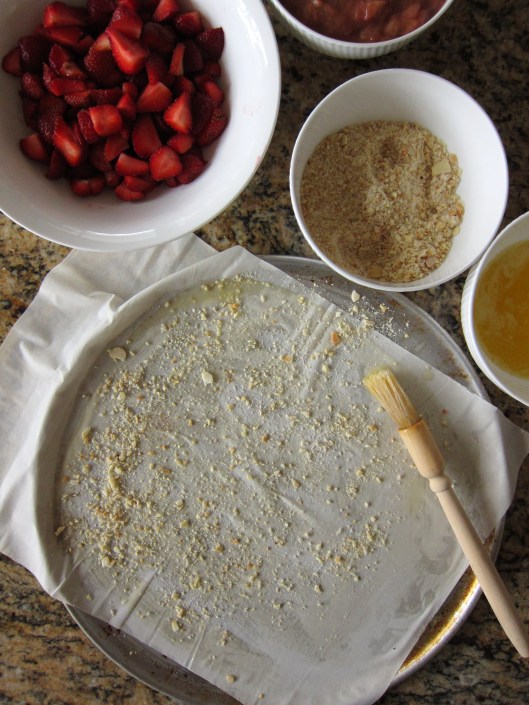 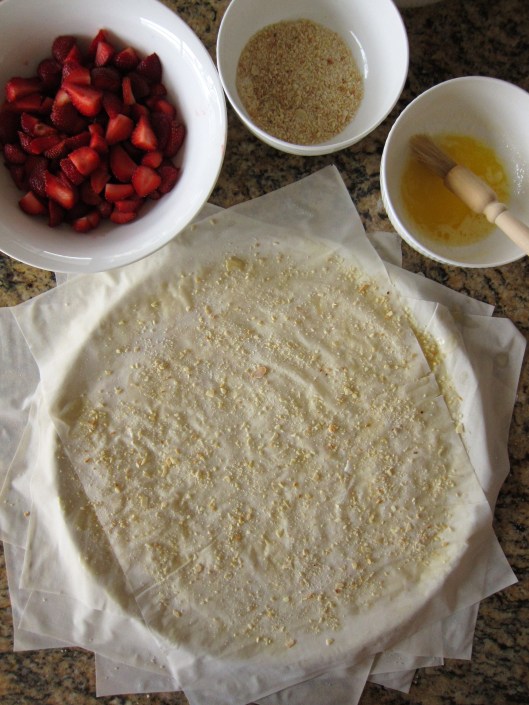 Spoon filling onto centre of phyllo; sprinkle with strawberries. 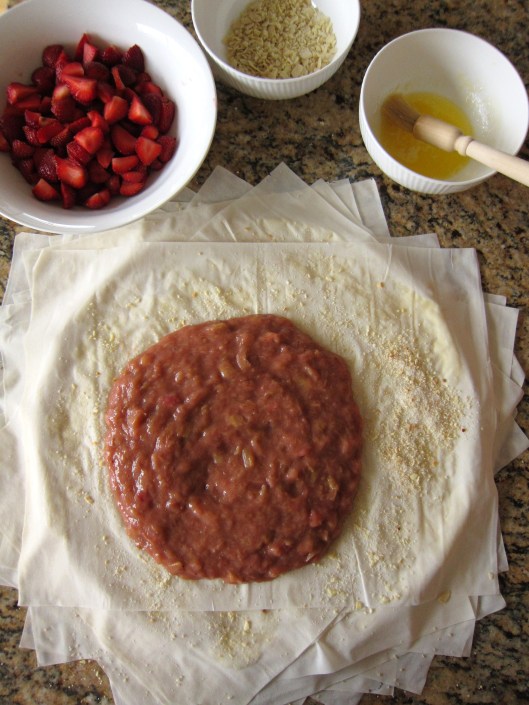 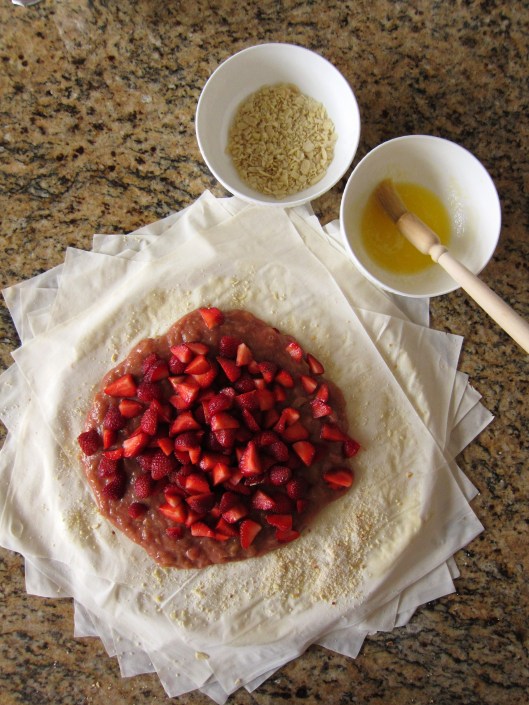 Starting with last sheet, fold phyllo sheets over, 1 at a time, folding ends back to create 4-inch (10 cm) gap in centre. Crumple ends into loose cluster around gap, brushing tops of each lightly with butter and sprinkling with almond mixture. 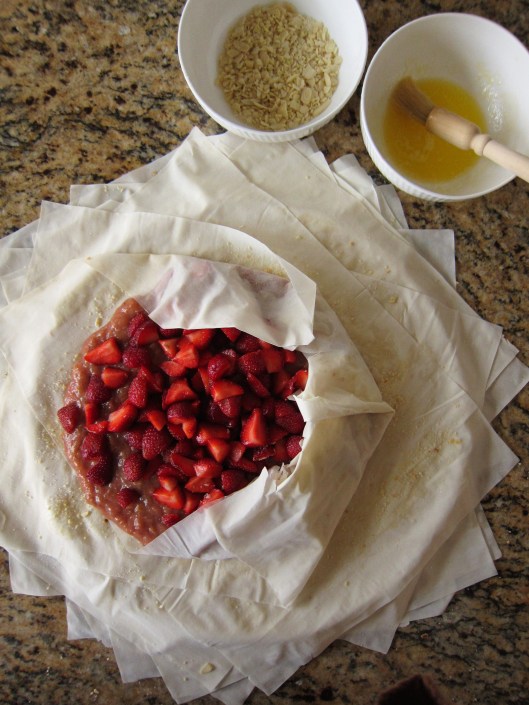 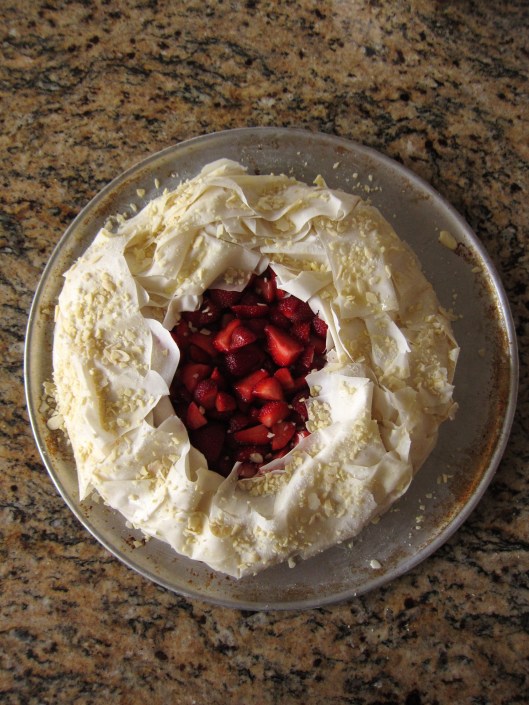 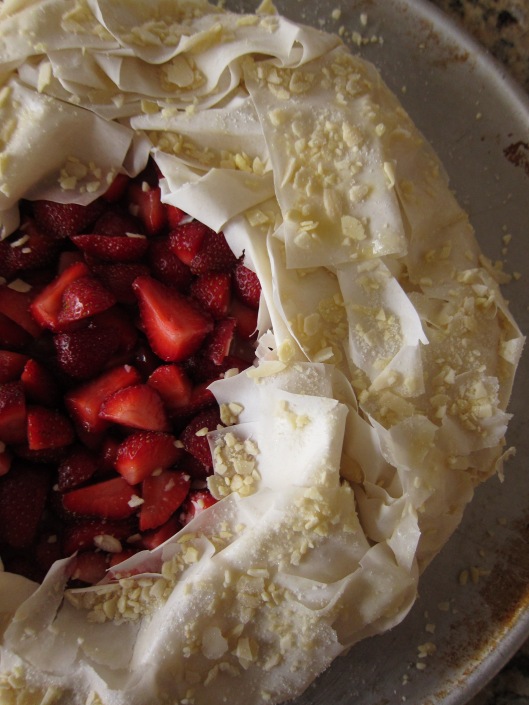 Bake in centre of 375°F. oven until phyllo is crisp and golden, about 35 minutes. Let cool on rack. Cut into wedges with a serrated knife. 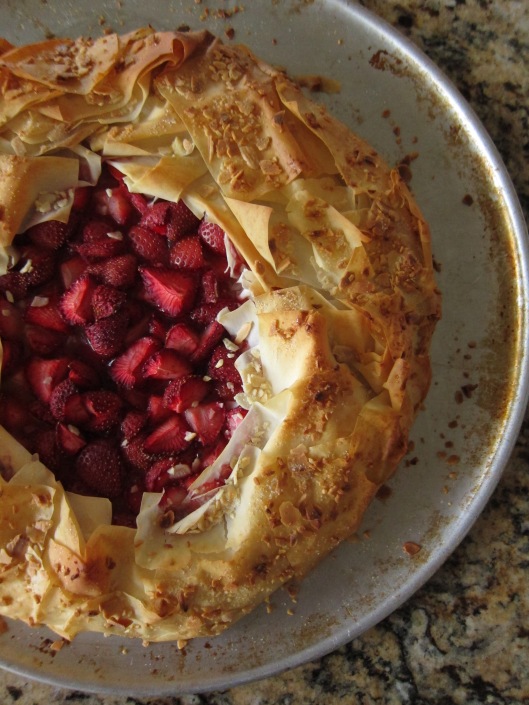 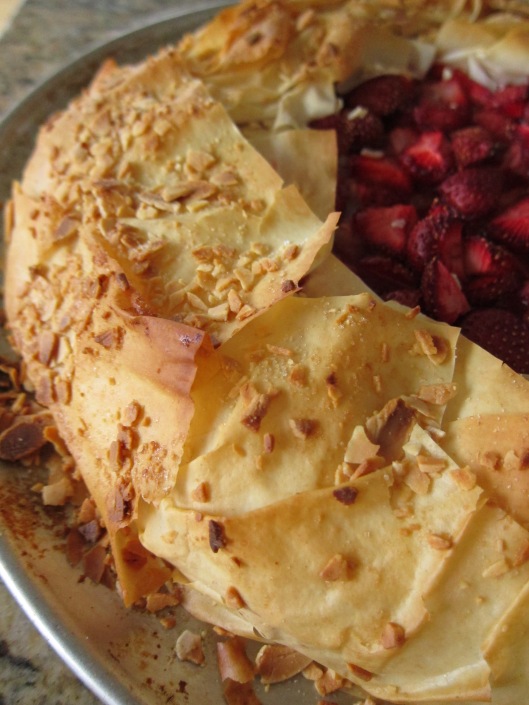 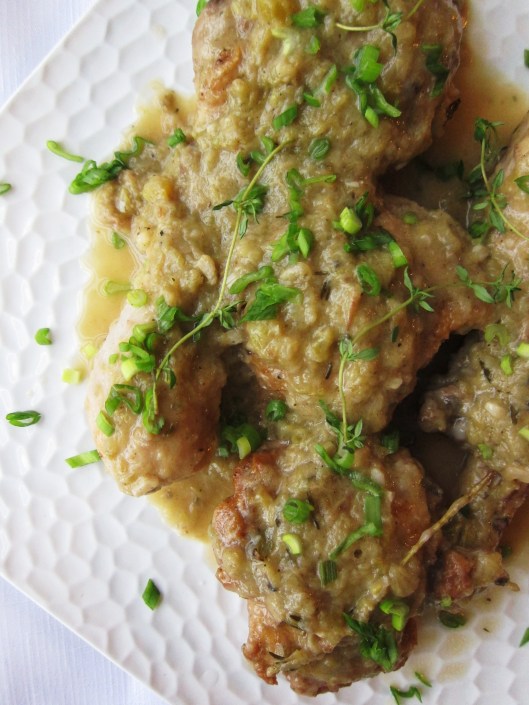 1) Pat chicken dry and season with salt and pepper. Place in a bowl with the thyme sprigs and cover. Refrigerate at least 1 hour or overnight.

2) Heat olive oil in a large skillet (or Dutch oven) over medium-high heat. Remove thyme from bowl with chicken and reserve the thyme. Add chicken pieces to skillet and sear, turning occasionally, until golden brown all over (about 10 minutes). Transfer pieces to a platter.

3) Reduce heat to medium. Stir in onion (white and light green parts) and cook until softened, about 5 minutes. Add garlic and reserved thyme; cook 1 minute more. Stir in wine and bring to a simmer, scraping up any browned bits in the bottom of pan. Add rhubarb, honey, 1/2 teaspoon salt and a few grinds of pepper. Return chicken pieces to pot in a single layer. Cover and reduce heat to medium-low. Simmer until chicken is cooked through (about 25 minutes) transferring chicken pieces to a platter as they finish cooking (the juices should run clear to indicate cooked chicken).

…and why not serve some roasted purple potatoes on the side!

Preheat the oven to 400°F. Parboil the potatoes on the stove top unitl they’re almost cooked through. Drain and transfer to a baking tray. Add crushed garlic, rosemary and oil; toss until combined. Roast for about 10-15 minutes, or until the edges of the potatoes are crispy. 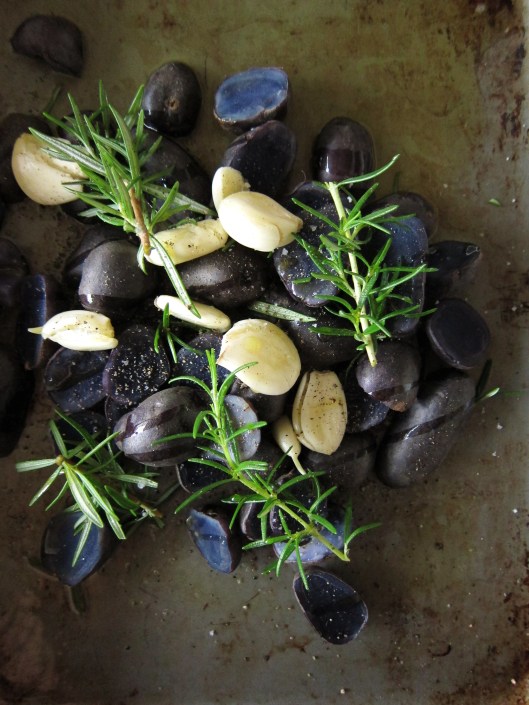 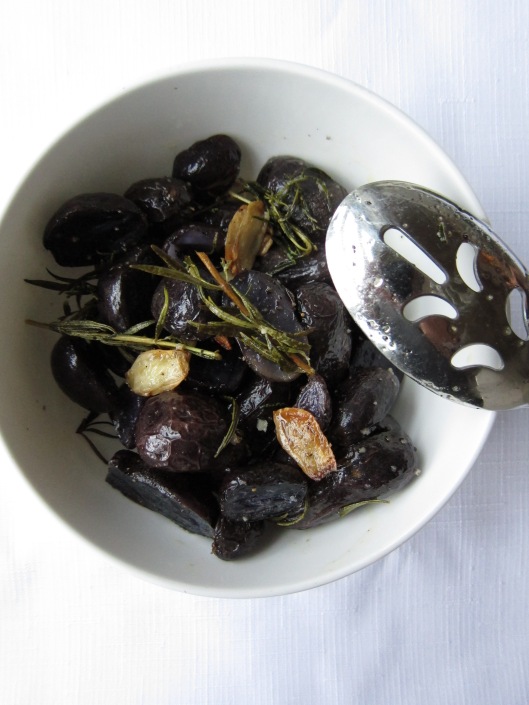 Of all the things I could have predicted about my young adult life, having recurring dreams about waffles would not have been one of the things on my radar. And yet, this is where I find myself, at 32, dreaming (literally, not figuratively) about breakfast food.

I guess things could be worse.

It all began about three months ago, when I had a dream I was making waffles on a beach. Then, a week later, there was another about waffles at my old high school; a few days after that, I dreamt I was eating them in Paris, curbside, with friends (because apparently I have Parisian friends now?). I woke up from that last one bleary-eyed, thinking why can’t dreams be real life??, then rolled over, closed my eyes and hoped that I could somehow lucid-dream myself into eating more waffles by the Seine.

According to the Interweb (where, of course, all accurate, reliable, trustworthy information resides) having recurring dreams about waffles is not exactly a good thing. But because I believe that dreams have a more visceral connection to what’s going on in our minds and bodies (because not only do I have imaginary Parisian friends, I’m also a hippie now?), I came to the conclusion that I probably just really wanted waffles – stacked high, with a generous slick of maple syrup across the top. So, the next available weekend, I made a point of honouring my demented breakfast dreams by scouring the neighbourhood for the perfect waffle.

After looking through the menus of a few places, I soon discovered that finding some standard, no frills waffles in this town is capital H Hard. Today’s brunch venues (complete with the requisite distressed-wood tables, exposed light bulbs and waiters with perfectly groomed handlebar moustaches) serve waffles that tend to be a bit too, er, hip…including varieties that are egg-less (oh boy this should be fun), Red Velvet-flavoured (ick), or lacquered in a weird, lavender-infused syrup (double ick).

It seems that the basic, trad waffle has been comically adulterated by the well-intentioned entrepreneurs of this city. All I wanted was a simple, straight-forward waffle. No fancy distractions. Just a really good, crispy, golden syrup-receptacle. After coming up empty, I spent the next couple of weeks asking myself – and anyone who would listen – where are all the freaking real-deal waffles at?

All that whining turned out to be beneficial, because on my birthday – lo and behold – I was gifted a WAFFLE MAKER. Yes – a machine with which I can make waffles WHENEVER I WANT. It seems like an insane prospect. And I will, without a doubt, become a hazard to myself in the process. But HOLY MACKEREL. WAFFLES. SORRY, BUT I FEEL THAT CAPS LOCKS ARE THE ONLY WAY TO FULLY CONVEY MY EXCITEMENT. That, and exclamation marks. Because…WAFFLES !!!!!!

Without an ounce of shame, I willl proudly admit that I’ve had waffles every single weekend since. The novelty having not fully worn off, I still get stupid-excited about pouring the batter onto the iron, closing down the top and waiting for the indicator light to turn green. It’s totally magical, even if they’re super easy to make. It’s the kind of food that makes you want to wear a feathered boa to breakfast and sing this Mariah classic at the top of your lungs, replacing the lyric “lover” with “waffle”. 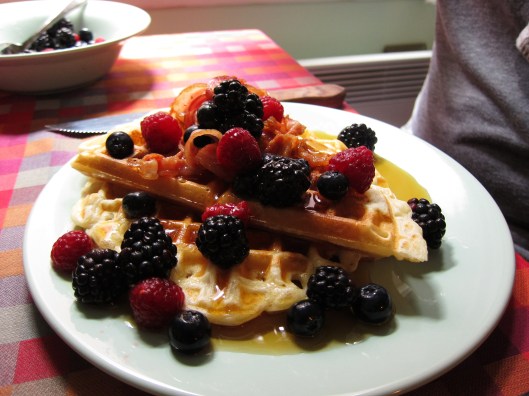 A quick note: These are not to be mistaken for belgian-style gaufres. These are decidedly US of A-style waffles – reminiscent of the thin, crispy, golden waffles of your Eggo youth. Only better, because they didn’t come out of a sad box from the freezer.

* genius trick for making quick buttermilk (courtesy of my mom): add about 1 tsp of white vinegar to nearly 1 cup of milk. Ta da!

Preheat a waffle iron. No need to grease it – the oil in the batter will allow the waffle to release easily. Follow the machine’s cooking directions. Serve immediately with syrup and any other accompaniments you see fit. 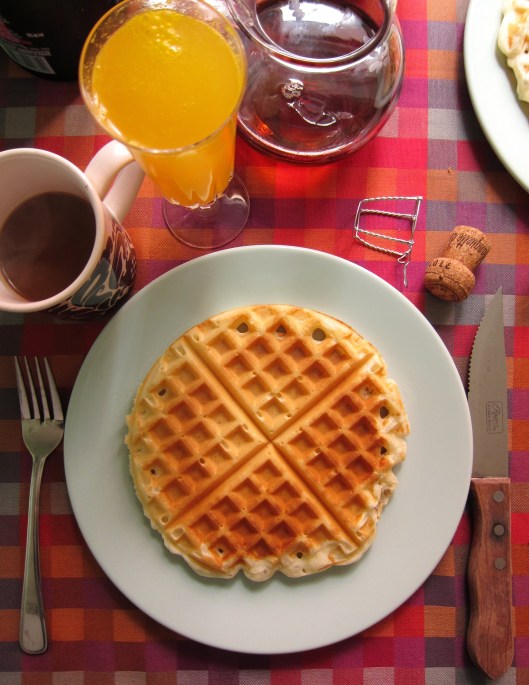 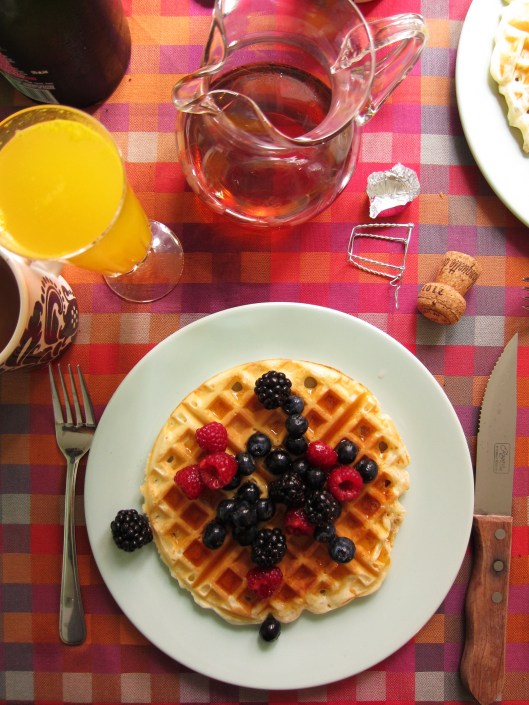