It isn’t always easy finding a way to write about a recipe. I have a stock pile of photos fermenting on my computer’s hard drive as we speak – dozens of things that I’ve wanted to share with you, but haven’t quite found the words to wrap around them.

Truthfully, I’m a little out of steam these days. That dreary arc of November to December saps my energy reserves in a way that I might never get used to, no matter how many winters I’ve lived this far above the equator. When mornings and late afternoons are the same shade of midnight, early winter has a way of siphoning your stamina in a steady, slow, undetectable kind of way. Like carbon monoxide poisoning. Except you’re still alive – just with a brain that feels like jelly, and eyes that hover half-mast, like Garfield’s.

On weeknights I find it hard to muster the energy to make dinner after a slushy, sloppy commute from the office, usually reaching for something that doesn’t require much thought or skill or focus: beans sautéed in onion and swiss chard, with toast; quinoa, a fried egg and some arugula; spaghetti carbonara, minus the bacon (that would be an extra step). In other words, meals that can be made practically blindfolded. The ones you want to have around when you’re tired and cranky and hungry, staring slack-jawed into the fridge on a dark, cold Wednesday night.

There’s one in particular that I’ve made on repeat over the last few weeks – an improvised version of something my friend Anne made a little while back when we got together for Friday night dinner. The ease of this meal is its superpower – no intensive chopping, sautéeing, or mucking about. All you do is: marinate some salmon filets in a slurry of soy sauce, brown sugar, and a few other things from your refrigerator door; bake slices of acorn squash with a sprinkle of salt and five spice (which will make the house smell like Christmas), then cook up a pot of brown rice while the fish is in the oven. It’s dead simple, but because you’ve got all those nice spices and saucy-things working their way into the fish, the squash, the rice, there isn’t a dull bite to be had.

Here’s to the winter solstice and to the longer (brighter!) days before us. x

(Note: I don’t usually measure when making a marinade, so I suggest using this as a guide, but tasting and adjusting as you go) 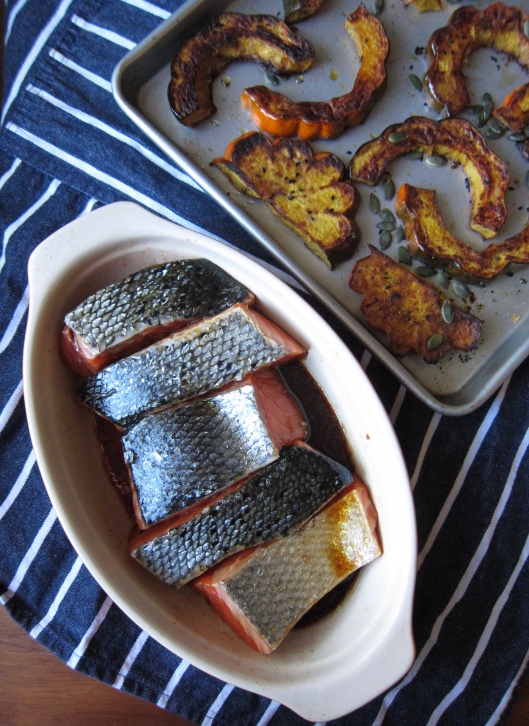 Note: since the squash cooks at 400°F and the fish at 350°F, I like to cook the squash first, then reheat it during the last 5 minutes or so that the fish is in the oven. The steps below might seem like a lot, but it really isn’t a hassle. I promise. And after doing it once, you’ll be able to wing it without a recipe, adjusting things to your taste as you go along.

1) Start by marinating the fish – an hour or two before serving, mix together the soy sauce, brown sugar, rice vinegar, sesame oil and fish sauce in a bowl or measuring cup. Slice the salmon fillet into sections (about 3 inches wide) . Lay the salmon sections in a shallow baking dish and pour the marinade over top. Cover and allow to marinate in the fridge for 30 minutes to an hour, depending on how much time you have.

2) Prep the squash – while the fish marinates, cut the squash lengthwise (leaving the skin on). Scoop out the seeds and filaments. Slice each half of the squash into half-moons, about 1 inch thick. Place on a baking sheet and drizzle with the olive oil. Sprinkle the five spice and salt over top, then toss the squash slices with your hands to coat all sides.

3) Cook the rice like pasta (approx. 35 mins)– rince the rice until the water runs clear. Allow to drain. Fill a medium saucepan 3/4 full with cold water, adding about 1/2 tsp salt. Put on high heat, covered. When the water begins to boil, add the rice. Bring back to the boil, give it a stir, then reduce the heat to medium-low and allow to simmer (lid ajar) for about 35 minutes (or until rice is cooked, but retains a bite). Strain the water and return the rice to the pot, allowing it to rest, off the heat, covered.

4) Cook the squash (approx. 25 mins) – while the rice is cooking, remove the fish from the fridge. Preheat the oven to 400°F. When it reaches temp, slide in the baking sheet with your prepared squash. Cook for about 25 minutes until golden brown, turning the slices halfway through, adding a few pumpkin and sesame seeds during the last few minutes of cooking. Remove from oven and reduce the heat to 350°F.

5) Cook the fish (approx. 15 mins) – put the baking dish with the fish and its marinade in the preheated 350°F oven. Cook for about 15 minutes, or until the centre is still slightly undercooked. Remove from the oven, cover it, and slip the squash back in for 5-10 minutes to warm up. (at this point, your rice should already be drained and resting, covered and warm.)

6) Serve – add the toasted sesame seeds and a sprinkle of togarashi (if using) to the rice and stir to combine. Plate the rice with a piece of fish and some squash. Drizzle with warm marinade from the baking dish.