We went to visit Nonna at her residence last Tuesday. She’s been there two weeks now, but it was my first time visiting her after her two-month stay at the hospital, where she’d been admitted on New Year’s Day. I’d heard that the first few days at the residence were difficult. She was angry and tired; she couldn’t fathom that she had ended up in what, at least on the surface, seemed like an extension of the hospital – a small room in a beige, paint-chipped ward where other residents wandered into eachother’s rooms, mistaking them for theirs.  As we rode over in the car, I was apprehensive, thinking about how she’d been feeling, her initial resistance and disbelief that she was never going back home. I thought about the empty house she left behind: the bedroom with the handmade doilies from Abruzzo, the dining room with the built-in buffet, filled with floral teacups and matching saucers; the kitchen with its tawny, 70s linoleum floor; the cellar where grandpa used to store demijohns of homemade wine…

On the night we visited, the residence was having a “brasserie” night. There was a raffle, dancing, and a DJ that played country music under a string of twinkle lights. Volunteers walked around in waist-aprons, handing out raffle tickets and prizes in the form of heart-shaped lollipops. The four of us sat at a table against the wall – mom, dad and I on plastic fold-out chairs and grandma in her plaid wheelchair. We encouraged her to have a glass of wine. They only had white, which she never drinks, but she had some anyway. After a couple of sips, she leaned in to tell me it was come l’acqua (“like water”). I promised to bring her the real stuff soon – the red Montepulciano she had every lunchtime at home, poured into a short tumbler from a twist-cap bottle. She nodded in collusion.

We shared a bag of Cheetos and watched people sway to a twangy version of Quand le soleil dit bonjour aux montagnes.  At one point I looked over at her, struck by how beautiful she looked, wrapped in a gold and burgundy shawl, and hair curled and set the day before by mom. It was lovely and disheartening in equal parts. Ninety-four years old. How does anyone get to ninety-four? It became clear that an era had ended, and that none of us were quite sure what would replace it. I thought about all the dinners and celebrations we’d had at her house – Christmas, Easter, birthdays, and everything in between, including the party we had after my brother and sister-in-law’s civil ceremony, when we hosted sixty people in a space that could comfortably hold thirty. I thought about the tomato-canning sessions every September that covered the kitchen in splatters of crushed passata, the assembly-line production of gnocchi, cookies, and ravioli; the summer afternoons in the backyard, sharing mounds of grapes and shooing away squirrels that snuck into the garden.

My heart cracked a little more. 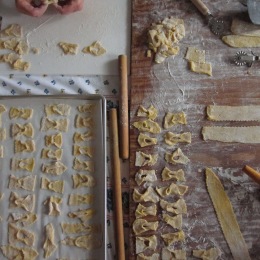 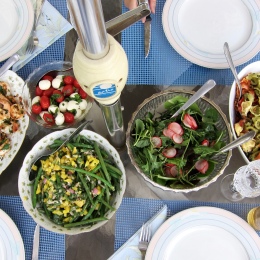 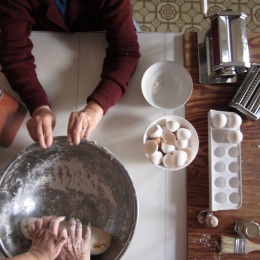 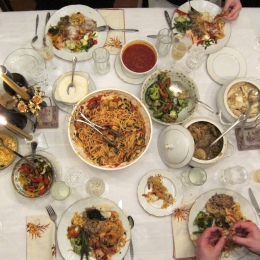 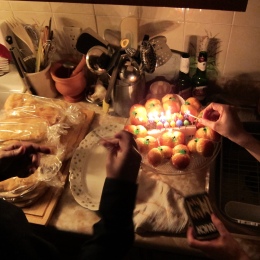 It’s a strange type of grieving. The person you love is still there, still mentally with it, but their regular spark is missing, siphoned away by physical fragility, circumstance, and an obligation to adapt. It’s a difficult thing to witness, even if most families will – at some point – go through some variation of it.

As with all difficult transitions though, there’s always moments of reprieve, allowing some of the hard feelings to recede. On this night, it came in the form of some cheap wine, a bag of Cheetos, and an evening in eachother’s company. That combination somehow created a bit of buoyancy in all of us; we’d been given a chance to see a piece of our old selves again. And it was nice.

After an hour or so, when the DJ packed up his things and the bright lights came back on, we brought grandma back to her room and got her settled in. I kissed her goodnight. Ti amo, Nonna. She smiled, È stata una bella serata. It was the first time I’d seen her smile in weeks. Instead of cracking, my heart brimmed with the best kind of love. I felt grateful instead of sad, beholden to all the indelebile experiences I’ve had with her, and will continue to have, for as long as I possibly can.

On loss and recipes

When it became clear that Nonna wasn’t going back home, and that our family dinners wouldn’t be the same as before, I found myself thinking about her recipes more than ever. Part of me worries that if I don’t hold onto them tightly, they might fall between the cracks, and become hazy, far-away memories, in the same way that when you lose someone, the details of their face become less vivid over time.

In the spirit of holding on tightly, I’ve been making her recipes whenever I can, writing them down, documenting not only the recipe, but the memories attached to them. One week, it might be her tomato sauce; another week it might be a minestrone or pasta fagioli. This week, it was her rosemary peas, a fixture at family dinners for as long as I can remember. They would usually be served alongside potato gnocchi, or pasta and polpette, or a pan-fried chop or steak. The thing that makes them stand out to me is how fundamentally basic they are, the well-loved anti-hero to fiddly recipes that require special ingredients. For one, you use canned peas (not the bright, freshly-shelled or frozen ones) and dried rosemary (not the fresh, elegant sprigs you might find growing on the windowsill) (full diclosure: I cheated this time, because I had fresh on hand). The only other ingredient – if you don’t count salt, pepper, and oil – is onion, which you cut into half-moons and sautée until translucent. The result is a beautifully mushy, sweet, aromatic mash that pairs well with with pasta dishes and meats like lamb, pork, or veal.

Mine will probably never taste exactly like hers. But I can sometimes get close, which is reason enough for me to keep trying.

Heat the oil in a pan on medium heat. When the oil is hot (but not smoking), add the sliced onion and cook until softened and glistening; add the rosemary and cook for a minute more, stirring every so often. Add the peas and stir to combine. Season with salt and pepper. Cook, stirring occasionally, until the onion has become golden and the peas have broken down a bit (about 10 minutes). Serve warm.