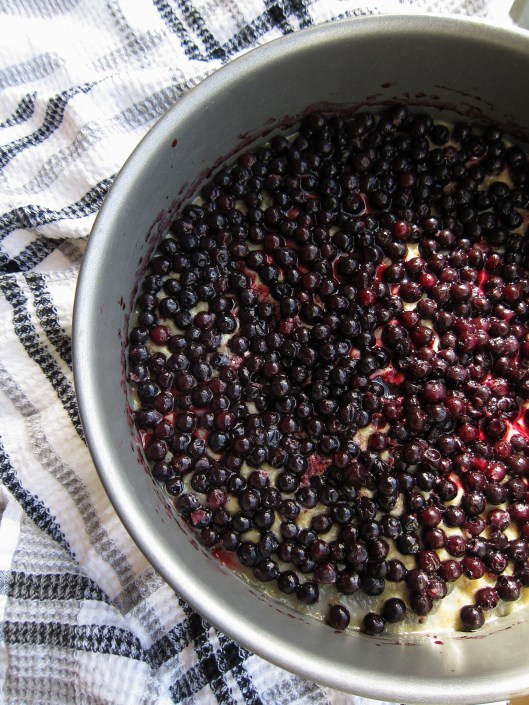 I’ve fixated on these photos and this blank page for longer than I’m proud to admit. It’s been an uncomfortable dance – coming back to the page at least a half dozen times, starting, stopping, flipping sentences, deleting whole paragraphs, trying the whole thing over from scratch. At one point, I even poured myself a glass of bourbon, thinking that if nothing else was helping, it might. (It didn’t. I got heartburn instead). At that point, I started wishing I had a typewriter – not because I thought it would solve my writing issues, but because I fantasized about ripping the page from the machine’s roller, crumpling it into a ball, and tossing it unceremoniously into the trash can, along with my frustrations. A bit of visceral, paper-crunching therapy would be nice right now. Somehow, pressing down aggressively on the backspace button isn’t half as satisfying. But, this is real life, not a smoky film noir, so I’ll have to content myself with the sticky backspace button on my I’m-old-and-I-almost-died-but-haha-I’m-not-dead-yet-so-you’re-still-stuck-with-me-you-cheap-bastard! laptop. My only solace is knowing that we’re this much closer to getting to cake. Just a few more words and we’re there…

1) It’s drop-dead delicious
2) It’s absurdly easy to make
3) Everyone who tastes it, without fault, will ask for seconds (or thirds, depending)

I think these three points form a pretty solid endorsement, especially when it comes to baked sweets, which often get a bad rap for being fussy. It’s a fail-proof, fool-proof dessert, capable of making anybody’s palate swoon. The batter bakes up fluffy and light, and the blueberries become nice and syrupy, crowning the top in a smooth, indigo-tinged layer. You’ll be grateful to know about this cake the moment you get invited to a last-minute dinner party, or picnic, or office gathering, and you’re asked to bring the dessert!! when really you were hoping they’d ask you to bring the wine and cheese. It’s a cake that comes together really quickly and without much mess, whether you’re a dessert-making novice or a baking pro who’s just feeling a little lazy that day. Once you lay that beautiful thing in front of your dining companions, the pieces will glide effortlessly, one by one, off the serving plate until all that’s left are a smattering of crumbs, blue-tinged lips and happy bellies.

Quick note on the recipe: I’m still using frozen blueberries right now, since we’re not in blueberry season in Quebec yet, but the recipe works with either – fresh or frozen. It’s entirely up to you.

Quick note on the pictures: for the final result, you’ll have to use your imagination – the cake got flipped, berry-side up, onto a serving plate much later in the day and the camera wasn’t nearby. Which is ok, because darting for the camera might have ruined the moment. To give you an idea, it will more or less look like this. When you flip the cake, remember to be bold – lay a serving plate on top of the pan, keep one hand on the plate and one hand on the bottom of the cake pan, and flip, confidently and swiftly, in one go. If you’re worried about the berries sticking to the bottom of the pan, don’t fret – the butter at the bottom of the pan will ensure that the cake slips out of the pan without incident.

Now go forth and make cake!

5) Bake in preheated oven for 45 to 50 minutes or until toothpick inserted in centre comes out clean. Let cool 10 minutes in pan, then turn out on to large flat plate. 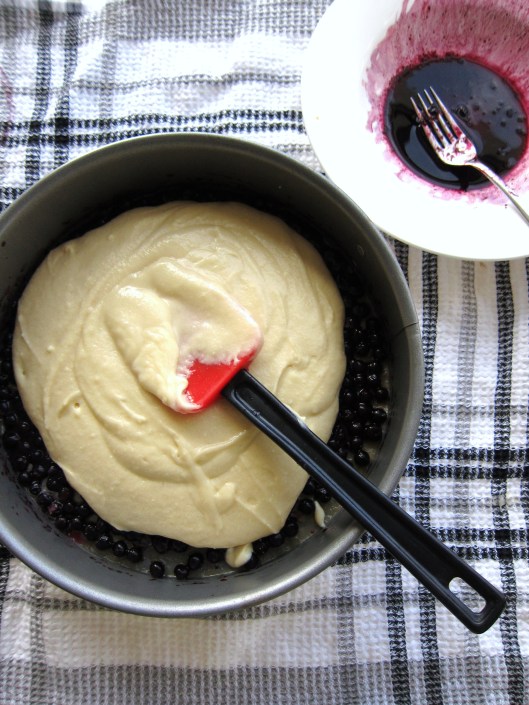 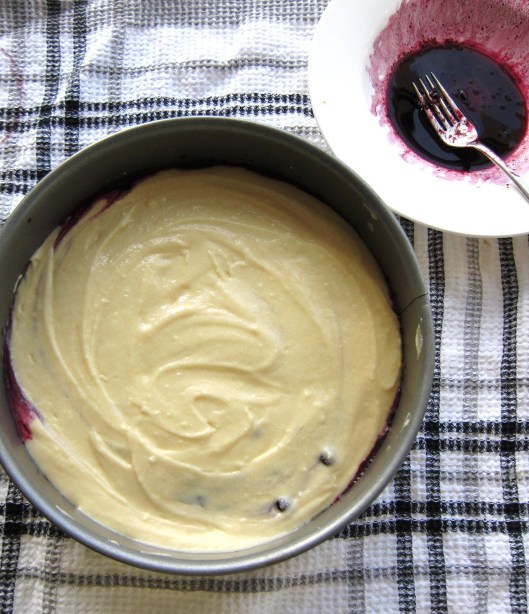 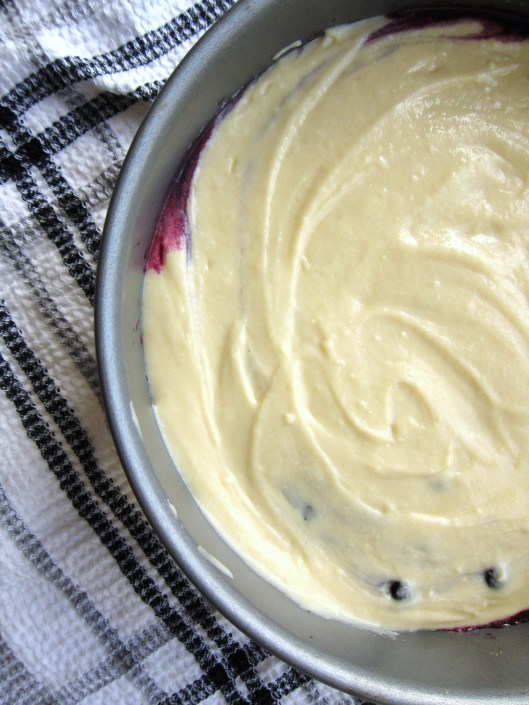 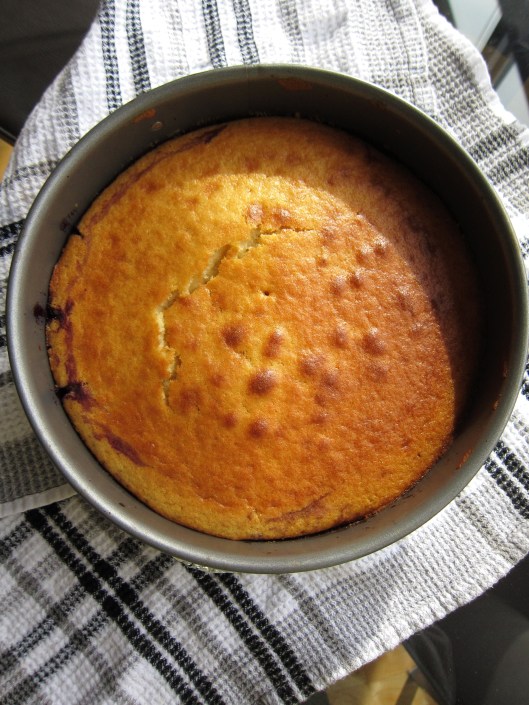 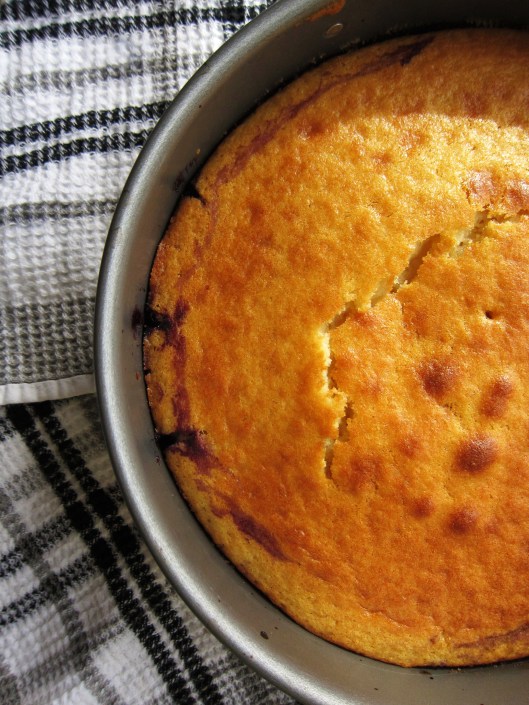