In a recent phone conversation with my mother:

Mom: Grandma and I are making cazzorelli.

Me (long pause): Wait, what? Cazzorelli? As in, cazzo?

Mom: Yeah, I guess so. That’s what grandma calls them. Hold on, let me ask her. Sono chiamati cazzorelli, no? (comes back to the receiver) Yeah, grandma says that’s it.

Me: That’s crazy. How come I’ve never heard of these? What are they?

Mom: They’re just these little polenta dumplings that you cook into a soup. They’re nothing special.

Me: Nothing special? Mom, please. THEY’RE CALLED CAZZORELLI. They’re special. Why are they called that?

Mom: I don’t know. They’re Abruzzese. I guess it’s because the dough is cut into little pieces…and so the idea is they look like…little penises? (long pause) You’ll have to ask grandma.

If you know my family, you’ll understand that this is a pretty typical conversation – about food, about dialect, about the where-what-how of my grandmother’s recipes. While Nonna holds a relatively small repertoire of recipes, each have their own backstory. Some are direct imports from her tiny village in Abruzzo, others are improvised dishes pulled together from the resources they found when they first moved to Canada. Some of them are vestiges of wartime food rationing, while others are decadent offerings served up on big platters at weddings, baptisms and religious holidays. Every single one of them – from the soft lemon cookies with the crackled tops, to the peas fried in onion and rosemary – has a story, an anecdote, a memory attached.

Up until this conversation with my mom, I thought I knew all of Nonna’s recipes. But for some reason, “cazzorelli” were never part of the rotation of dishes I grew up with. The crudeness of the name, and the casual way that mom and grandma threw around the word, were an open invitation for follow-up questions. So, you’re telling me that people just go around Abruzzo saying, “Today I’m making little penis soup?” What if you make it for your in-laws? Do you still call it the same thing? Am I the only one that thinks this is hilarious?

That is, until a few days ago, when I discovered that they’re not actually called “cazzorelli”. No. It turns out they’re called “cazzarielli”. Perhaps even worse, this (subtle! So, so subtle!) orthographic error was exposed, not by Nonna, but by a standard Google search. So technically, this dish isn’t called “little penis” soup. At best, it’s called “little pieces” soup.

Trust me. I’m just as disappointed as you are.

This kind of mix-up is par for the course in dialect-speaking. Entire syllables get lobbed off; vowels at the end of one word melt into the next. Genders get jumbled. And, inevitably, bits of the message get lost in translation. This soup (the one I began to call by a name that didn’t exist) is the perfect example of how dialect speaking – based almost entirely on phonetics – has a sticky habit of transforming words and their meaning. Food customs also travel an imperfect road, which is why it shouldn’t come as a surprise that there are pieces missing by the time they get to us. But I like to think that all that shifting and travelling allows them to gather substance for new stories and, ultimately, new memories. Like the name of this soup. Cazzarielli will always be cazzorelli to me, because that small phonetic flub is something I will always look back on with a big, stupid grin on my face when I think of that conversation with my mom. It’s one of the few things that’s worth being wrong about.

And now, a few notes on this soup itself:

Like any good Italian peasant food, this soup fulfills three basic tenets – it’s inexpensive, easy, and satisfying. Small polenta “gnocchi” are cooked in a thick broth made up of water, potato, Brussels sprouts, fried garlic, and some chili flakes, all of it simmered with a slab of well-marbled pancetta. I imagine this was the kind of food they’d feed soldiers, or farmers, or the pregnant women who tended the fields in their third trimester (yes, yes they did). It’s robust, no-frills fare. And it certainly doesn’t win any points in the looks department. But what it lacks in aesthetics it more than makes up for in flavour. It’s rich, garlicky and full of pleasantly chewy bits of polenta, potato and cabbage. In other words, pure comfort in a bowl.

Grab a spoon and tuck in. 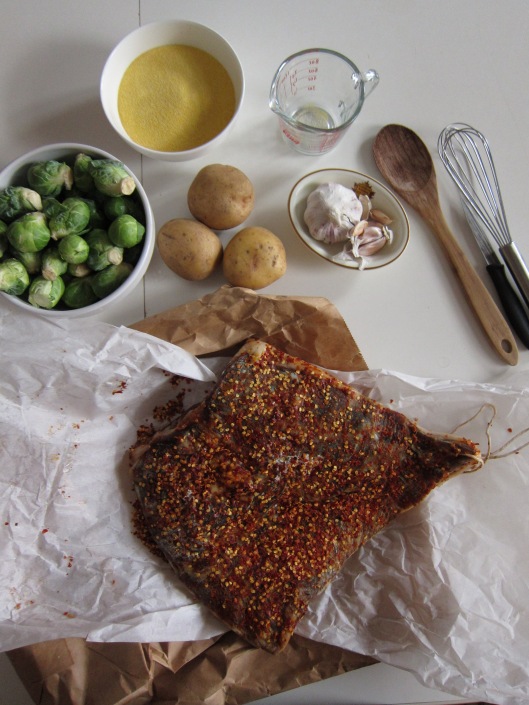 1) Start by making the dough: pour the polenta into a large mixing bowl and slowly whisk in the hot water until the dough comes together. Then work the dough lightly with your hands to form a loose ball. Sprinkle with flour and set aside.

2) Start making the soup: heat the olive oil in a large soup pot; fry the the halved garlic cloves with the chili flakes until garlic is golden brown. Add the Brussels sprouts, pancetta and potatoes; stir to combine and allow to cook for 1 minute. Add seven cups of water and reduce the heat to medium-low. 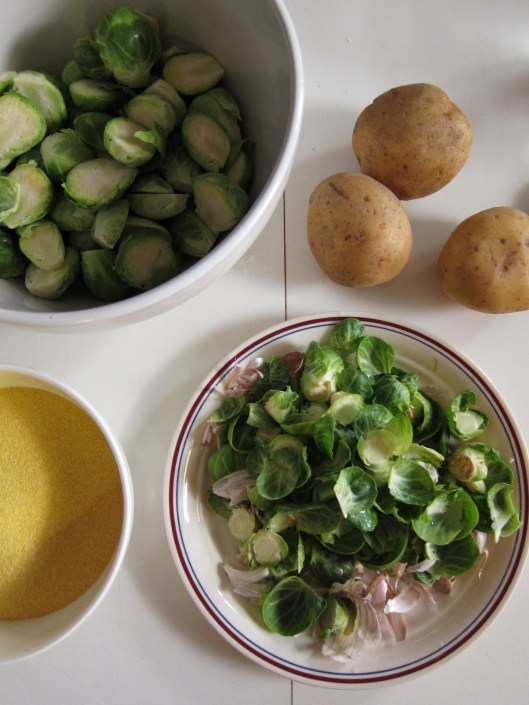 3) While the soup simmers, make the cazzarielli: cut 1″ pieces of the dough and roll lengthwise into “snakes” on a floured surface. Cut the long pieces of dough (“snakes”) into small 1/4″ pieces. Place on a parchment or towel-lined baking sheet and sprinkle with flour to avoid sticking.

4) When the cazzarielli are all made, lift them in batched in your hands to allow excess flour to “sift” through your fingers and add to the soup pot. Allow to cook about 15 minutes, or until they are tender. You may need to adjust the amount of water if the soup gets to thick (helloooo starch!). We like our soup to be somewhere between a minestrone and a chowder in terms of thickness and texture. Serve hot. 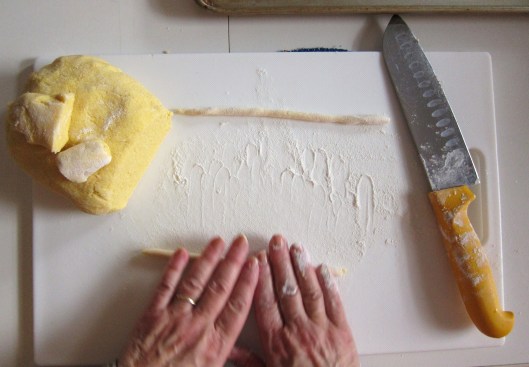 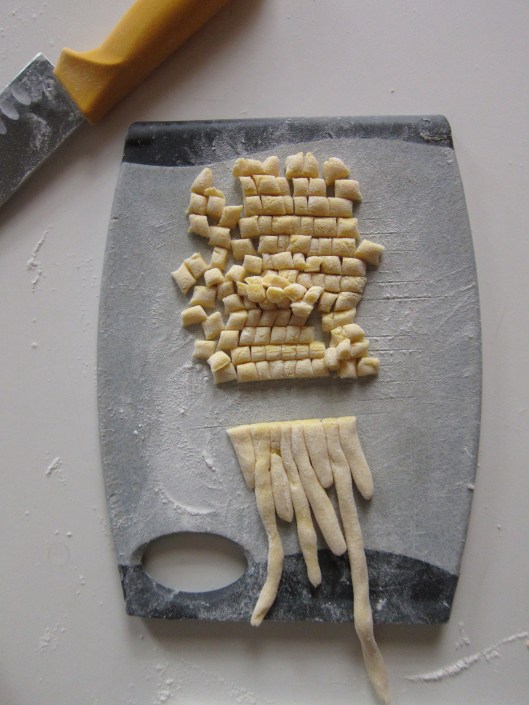 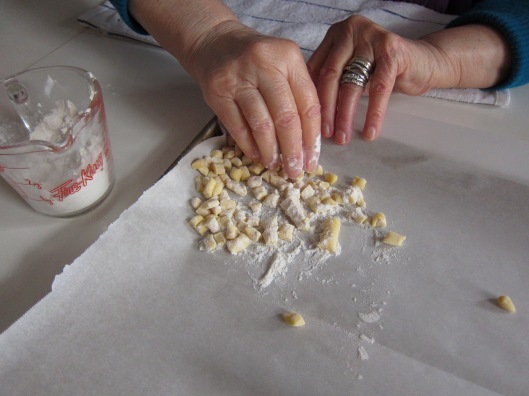 10 thoughts on “A Soup Lost in Translation”