I’d like to start this post by outing my mother, who, upon seeing this batter in the baking tin, turned and said, unflinchingly, “those look like breasts”. It was very matter-of-fact, and not the least bit sophomoric, but now all I see when I look at this photo are pairs of ample breasts with shockingly red nipples.

What you might also see in this photo – if your mind is far enough out of the gutter – are French madeleines, right before they were slid into the oven.

I took great care to make sure these turned out the way they were supposed to. It was my first attempt at madeleines, and since 1 out of 4 every baked goods I make either ends up soggy, or stodgy, or hard as a rock, I was determined not to screw it up. After all, I was dealing with a French classic. Its reputation was on the line.

To avoid any mishaps, I needed to eliminate the one thing that couldn’t be counted on, the bane of my homemade baking: my oven. It’s a relatively new, second-hand Frigidaire that came with my rental and which I have been living with (and swearing at) for the past three years. Our relationship is a complicated one. I can’t exactly get rid of it, but that hefty, white hunk of metal has done things to me that should qualify as grounds for divorce. (Our legal papers would read “irreconcilable differences”.) Cooking and roasting savoury stuff is fine. I manage. But sweets? It’s like playing Russian roulette. Sometimes it works out, sometimes you end up with burnt bottoms and wobbly insides. And a puddle of tears. So in moments when I’m suddenly inspired to make something like, say, madeleines, I sometimes don’t bother with my oven. Instead, I’ll call up my mom and ask if I can use hers – a convection masterpiece with electric touch-screen buttons and an extensive range of settings, like “roast” and “bread proof” and “self-clean”. It’s even got a warming drawer. Most importantly, though, it’s an intelligent piece of equipment that yields perfect results every. single. time.

It’s a Saturday morning when I ask if I can come over to bake, batting my eyelashes as loudly as I can through the receiver. It’s just madeleines. I promise I won’t make a mess. I’ll even bring my own butter. She should be weary because she knows full well that my plans usually devolve as soon as I have free reign of the kitchen, turning everything upside down to concoct improvised soups and sauces and casseroles – oh, you have parsnips? what can I make with parsnips? – and just generally wreaking havoc. It’s my way of making the most of the time I have in her kitchen. Dad sometimes walks in, unaware of the cooking hurricane underway, and after scanning the piles of chopped vegetables and dirty dishes, asks with a voice that is half-concerned, half-curious, “whatcha makin’…Jules?”. Beating me to the punch, mom replies, “oh, LOTS of things”. She smiles with a grin that is equal parts amusement and eye-roll.

But because she’s preternaturally patient, generous and lovely all-round (and because dad usually rolls up his sleeves and helps with dish duty), she lets me come over and toss things around her kitchen and use all her implements without ever complaining. She doesn’t even flinch when I climb onto a footstool and start installing my tripod on her countertop, that gorgeous slab of granite which, in case you’re wondering, bares no resemblance to my dinky, melamine one. Baking at my folks’ place is like baking in a showroom kitchen. Except better, because they they don’t kick you out when you start laying out pots and pans and batter-covered spoons all over the counter.

They’re especially patient when they know that you’re going to share a freshly-baked batch of sweets with them. Like, say, a dozen madeleines.

I don’t know about you, but where I live, madeleines aren’t as ubiquitous as their French counterparts, the croissant, the brioche and the macaron. Most of the madeleines I’ve come across have been of the pre-packaged variety, sharing the shelf with the more popular May Wests and Passion Flakies in that phantasmagorical aisle of the supermarket that make children go all googly-eyed. The madeleines, for their part, always look as though they’d been there since World War II, so despite their sweetness and cake-like texture, even as a kid I was never really interested in them. (I might’ve poked at them a bit through the plastic – as one would inquisitively poke a toad in a glass jar – but that was the extent of our relationship.) Even now, it’s rare that I come across them in bakeries and cafés, and even if I do, I’m usually too distracted by the pains au chocolat.

But that was before I discovered raspberry and lemon curd madeleines.

It happened about two weeks ago, when, while searching for some tarte tatin recipes, I came across these nifty BBC videos of Rachel Khoo – a charming, impeccably dressed, British francophile who left her job in the fashion industry to move to Paris and bake cakes. (I know, it’s like out of a movie. Have your life-envy buttons been pushed yet?) I’ll let you work your way around the Internet and discover her on your own, but I’m bringing her up here because of the aforementioned raspberry and lemon curd madeleines. In one of the BBC videos, she demonstrates her take on these mini sponge cakes, using the traditional recipe of butter, eggs, sugar and flour, but then dotting each one with a fresh raspberry, followed by a squeeze of lemon curd into the raspberry’s “crater” once they’re removed from the oven. It’s a small flourish, but it’s genius.

It also proved that madeleines and I had just gotten off to the wrong start. Unlike the ones I’d seen languishing on grocery store shelves, these were soft and tender, lightly sweet and scented with threads of lemon peel. When you bite into it, the burst of raspberry meets the sweet and sour lemon curd and magical things happen. Particularly if they’re still warm from the oven.

One last thing: to achieve the traditional shell-shape, you’ll need to get your hands on a madeleine tin if you don’t already have one. They go for about $20 in kitchen supply stores. It might seem a lot to spend on a tin, but they do make a pretty little sponge cake. Besides, I’m sure you’ve spent twenty bucks on sillier things in your lifetime and now you’ll get to make sponge cookies that start out resembling breasts, but then end up looking like red-eyed cyclopses!

Raspberry and Lemon Madeleines with Lemon Curd (makes 24) – inspired by Rachel Khoo; madeleine recipe from The Encyclopedia of French Cooking, 1982

*you’ll be using the juice of this lemon to make the lemon curd
**given that the lemon curd takes a few hours to chill, you’re best to start by making the curd (see recipe below)

In a medium-sized mixing bowl, beat the eggs, sugar and pinch of salt until light and fluffy. Sift the flour and baking soda; fold into the wet ingredients. Fold in the melted butter and lemon zest. With a piping bag, squeeze batter into prepared fluted tins, making sure not to overfill (you can also spoon in the mixture if you don’t have a piping bag). Place one raspberry in the middle of each madeleine. Pop in the oven and bake for 12-15 minutes or until golden. 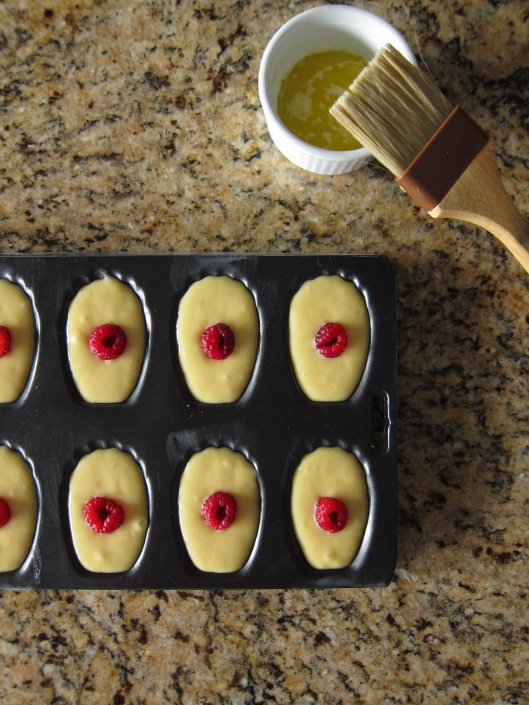 Note: you’ll likely have leftover curd after filling your madeleines, but you can use it as a sponge cake filling. Use within 2-3 days.

1) In a saucepan on medium heat, combine sugar, butter, lemon rind and juice. Stir until butter has melted and sugar has dissolved. Remove from heat.

2) Beat the egg yolks in a medium bowl and and slowly whisk in the lemon mixture in a thin stream to temper the mixture.

3) Return mixture to saucepan and stir constantly until it reaches a boil, then reduce the heat and keep stirring until thickened (about 10 minutes).

4) Pour into a glass bowl and once cooled, place plastic wrap on the surface and chill in the fridge (about 3 hours).

5) Whip the cream until you reach soft peaks and fold gently into the chilled lemon mixture.

6) Fill a piping bag with the lemon curd. While the madeleines are still warm, pipe the curd into each raspberry’s “crater”.

8 thoughts on “Life envy and madeleines”