It was mid-October when Shane, Margaux and I went apple picking in Oka. We walked through dewy grass, relishing the cool, fresh air that smelled of earth and leaves. Everything was misty and moody and gorgeously still.

It being late in the season, and drizzling, meant that we were the only three people in a large, rolling orchard surrounded by flame-coloured trees. We wandered through the rows, plucking apples, some as dark as plums and others as large as grapefruit. From time to time, geese flew overhead in squawking, V-shaped strings. 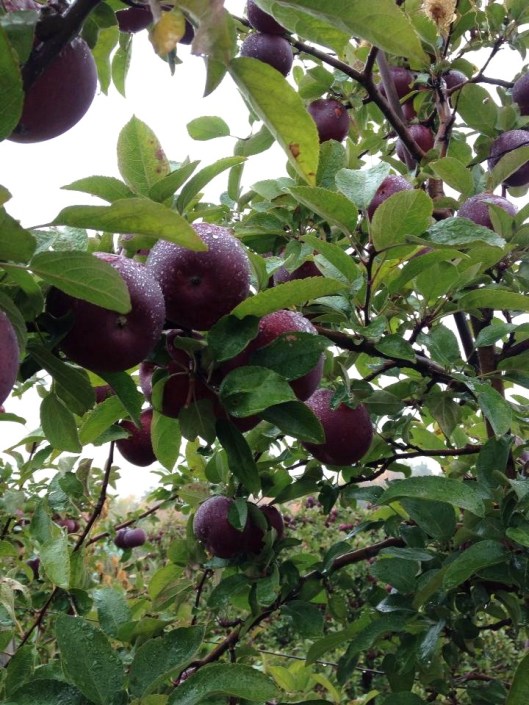 We carried our bounty back to the house to be weighed, where our host served hot cups of carrot-apple soup. Our plans to go for a short hike were overheard. “You can reach the National Park through the orchard, you know.” 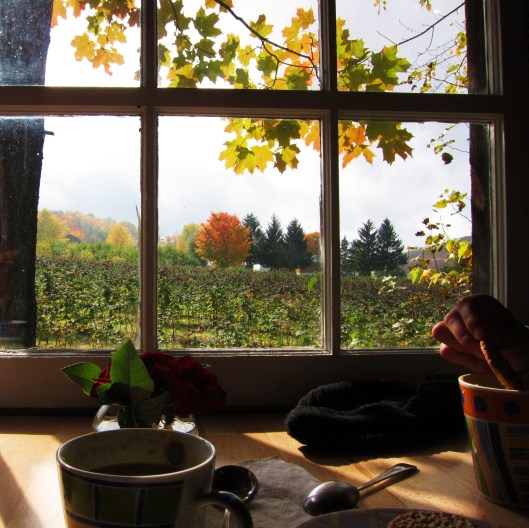 Grateful for the advice, we followed the long path through the orchard to the point where it met the Park, stepping into a tree-filled landscape dotted with yellow leaves that fell to the forest floor like snowflakes.

On the edge of the forest came a clearing, leading us to a look-out over the River of Two Mountains. In a miraculous change of weather, the cloudy mist had given way to full sunshine, beaming and hot. 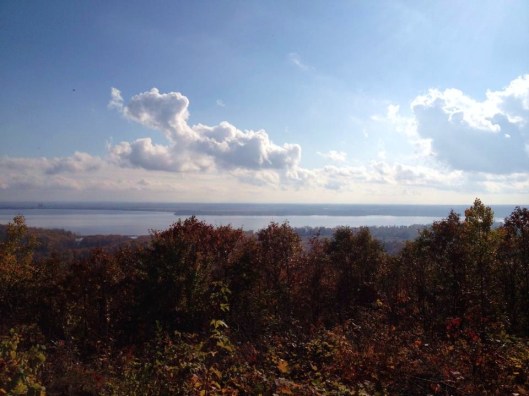 The only consolation for leaving this enchanting place was the batch of round, red beauties we got to take home with us – four kinds, each with a personality of their own.

While all were delicious, I had a soft spot for the crunchy, plum-coloured Empire, which were used in this tart. I wasn’t sure they would survive the heat of the oven, but they held their shape, fanning out elegantly along the crust and bejewelling the top of the custard with their beautiful, dark skins. It sounds chic, but it’s actually very simple. And a nice way to pay homage to the familiar flavours of apple, vanilla and butter. If you close your eyes, you can almost smell the orchard.

Put the flour, salt and sugar in the bowl of a food processor; then add the pieces of butter. Pulse until you reach a coarse crumb texture. Keep pulsing while slowly adding the cold water through the feed tube until the dough starts to come together (if you don’t have a food processor, you can also do this with your hands.)

Turn out the dough onto a floured work space and work it gently until it comes together, being careful not to overwork it. Flatten into a disc and refrigerate for about 20 minutes.

Filling – adapted from The Encyclopedia of French Cooking, 1982

Pour the lemon juice into a large bowl. Cut and core the apples one by one, slicing them thinly (about 1 cm thick) and adding them to the bowl of lemon juice, stirring to prevent discoloration.

Remove the dough from the fridge and roll it out on a floured surface into a circle large enough to line the base and sides of a tart pan (preferably with a removable base). Roll the rolling pin over the top to remove the access dough off the sides.

Arrange the apple slices in a tart pan in a circular pattern, working from the edge of the dish inwards, and overlapping the slices slightly. Bake in the preheated oven for 10 minutes.

Meanwhile, put the remaining filling ingredients in a bowl and whisk together.

After the 10 minutes, remove the tart pan from the oven and reduce the oven to 375ºF.  Pour the egg mixture over the apple slices. Return to the oven and continue baking for an additional 30 minutes at 375º F. Serve warm. 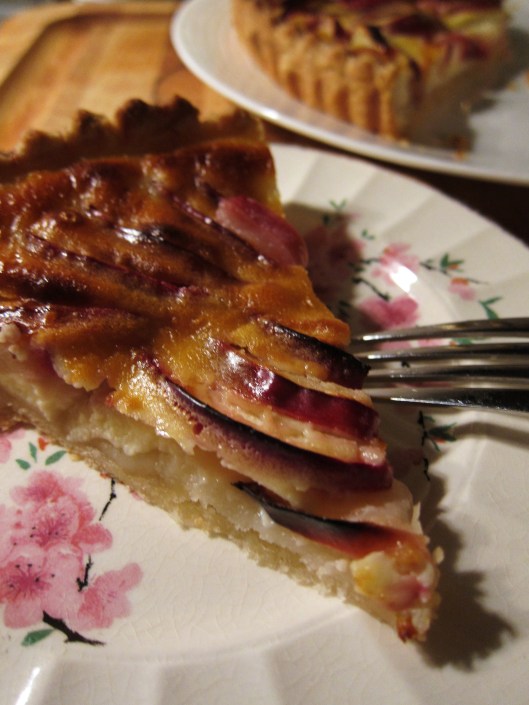 (Orchard photos by Shane, Margaux and me)