“One of the secrets, and pleasures, of cooking is to learn to correct something if it goes awry; and one of the lessons is to grin and bear it if it cannot be fixed.” – Julia Child

A couple of weeks back, I took a short viennoiserie class with the lovely people at La Cuisine Paris, where pastry chef Guillemette guided half a dozen of us through the different techniques and steps required to make croissants, amandines and chocolatines. It was a bit of a surreal experience (pastry class, in Paris, in the springtime – pinch me), and despite not really being in my element, I ploughed away and left the class with a palpable sense of accomplishment. However minimal that accomplishment may actually be in grand scheme of things…still…I MADE CROISSANT. High five.

Arriving back in Montreal, I knew that if the information was left to hang out in the dusty recesses of my brain, I was sure to forget the details and subtleties that Guillemette had imparted to us. Not wanting to waste the potential of the experience, I stocked up on supplies and found the first available weekend to make a go of it. To my surprise, I also had volunteers willing to roll up their sleeves and do it with me – which was perfect, because not only would I have additional man-power, but I’d also have (other) inexperienced people to blame if it all went to hell.

The start was promising – I had my yeast from the baker, my electronic scale, my mise en place. The whole set-up was disturbingly perfect. Even the starter dough, the thing I was most worried about, seemed to look and feel like it should when I tucked it into the fridge to rest overnight. I began to feel a little like Maria in that scene from the Sound of Music.

But soon, I was brought back to the reality of my amateurism. And things got ugly. Fast.

On the second turn (folding) of my puff pastry dough, the underside was showing signs of tearing. At first, it was just one tear, which I quickly (sloppily) patched up. But then the more I rolled, the more the dough started to look like it was suffering from third degree burns. The butter began to ooze out from air pockets that had formed during rolling, resulting in a pot-marked dough that looked nothing like the one I had made in class. Family was in the room, so I restrained from swearing aloud, but in my head there was a foul-mouthed sailor blaspheming on repeat.

Distracted by my ugly, ugly dough, I forgot to add a slick of egg wash to the first batch of croissants, which may explain why they turned out more like overcooked dinner rolls. My taste-testers assured me they were good, but I’m pretty sure I heard someone compare them to the kind that come in the blue tube – you know, the one with that freakishly upbeat, miniature weirdo made of dough. With that as the barometer, I can’t say the croissants came close to the real deal. But while you wouldn’t pay good money for them, you’d probably eat them if they were hanging out on your aunt’s brunch table…and you were bored.

Then came the amandines, which looked promising before going into the oven, but then for some reason, decided to get their freak on: as they baked, the almond paste flowed liberally off the pastry, causing these pretty little “baskets” and “pinwheels” to morph into nondescript blobs, some of them binding together and making Siamese twins (I blame this not on the recipe, but rather my decision to make the almond flour from scratch. Bad move…).

The saving grace in this whole process were the chocolatines. They (miraculously) turned out flaky and delicious and even looked normal. Not perfect, not the best…but good. The taste-testers even took seconds, which is usually a good sign. Right at the moment when my faith in this experiment was sinking, the chocolatines bolstered my confidence and gave me hope that it is possible to make good croissant at home.

I suppose the bigger lesson in all this is that sometimes our expectations in the kitchen are shot down; sometimes the bread hasn’t risen or the cake has stuck to the tin or, in the words of Ms.Child, “the cat has fallen into the stew”. C’est la vie, mes amis. What would be more tragic is if these kinds of experiences turned us off from ever trying these things in the first place…

…ultimately causing us to miss out on moments like these: 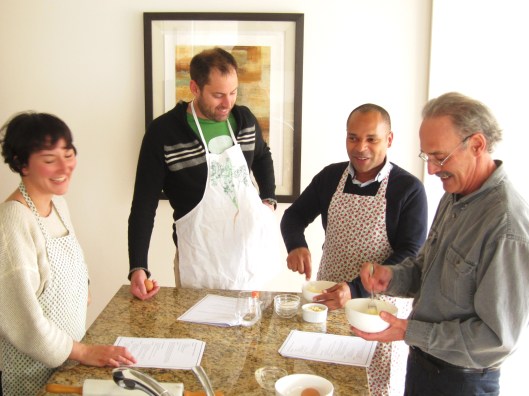 Because, let’s be honest – an afternoon in the company of apron-clad men is time well spent.

On that note, I whole-heartedly encourage you to try making your own croissant. Here are a few things I learned (the hard way) and that you might want to keep in mind:

1) Give yourself plenty of time. No matter what recipe you end up using, all of them will require you to rest the starter dough (minimum 6 hours for mine) and the rolled dough between “turns” (folds).

2) If the dough seems warm or sticky or springs back a lot when rolling, put it back in the fridge. Along the lines of the point above, you’re better to err on the side of caution and rest your dough, even if it’s for a longer period of time than the recipe suggests.

3) When rolling the dough, be firm but gentle. The final result you’re aiming for is a light, flaky croissant that has several airy layers. It won’t reach it’s potential if you start getting rough with it – you’ll end up tearing the dough and making holes in the layers. NO BUENO.

4) Chill out. You are not a pastry chef, nor trying to be one. If things start to look scary, step away for a minute and take a deep breath. The Earth will not stop turning if your croissants aren’t perfect. Even if they’re inedible, you get a gajillion food-nerd points just for trying.

One last thing: Guillemette has kindly allowed me to share her almond cream recipe with you (merci Guillemette!). It’s traditionally used as a filling for almond croissant (amandines), but it’s also wicked in coffee cake and probably most places you would normally use marzipan.

Combine butter and sugar in mixing bowl and mixwith a wooden spoon until creamy. Add egg and mix until completely combined. Add the almond flour and all-purpose flour and mix well. Add flavoring and stir to combine. Cover and place in fridge 10-15 minutes before adding to amandines (can be kept in the fridge for up to 4 days or frozen and defrosted in the fridge).

11 thoughts on “Learning to grin and bear it”