I fully acknowledge that talking about the weather is best left for encounters at the water cooler, in the elevator, on the sidewalk with that neighbor you only see twice a year – situations where there’s a mutual understanding that you’re both just filling conversational space with a topic that, while effortless to discuss, can be pretty dull.

It has been one billion degrees below zero this week, and that kind of cold does all sorts of crazy to you. In times like these, talking about the weather becomes an integral part of social interaction, more along the lines of communal therapy than mundane chit chat.

Yes, it’s January. In Canada. In QUEBEC – land of the winter Carnaval and Igloofest. We weirdos have a tradition of celebrating the cold. We even have a formally appointed mascot. But this cold snap has tested our resilience. With temperatures at –40 C, cars seized, eyelashes froze, pipes burst. News reports reminded us, quite aggressively, that exposed skin would freeze in 10 minutes and that neglecting to reduce our energy consumption would cause blackouts.

There is one thing, though, that comforts me – and that is knowing that there is a hefty batch of granola on the middle rack of the oven, slowly toasting itself into golden oblivion. Not just any granola. This granola:

I’m not a cereal person by nature, but this granola has completely bewitched me. I forgot about the cold, the snow, the icy side-walks and harsh winds. With the hot scent of brown sugar, pumpkin seeds and toasted coconut emanating from the oven, it could’ve been the zombie apocalypse out there and I wouldn’t have noticed.

Put oats, pumpkin seeds, sunflower seeds, coconut, walnuts, syrup, olive oil, sugar, and 1 teaspoon salt in a large bowl and mix until well combined. Spread granola mixture in an even layer on a rimmed baking sheet. Transfer to oven and bake, stirring every 10 minutes, until granola is toasted (about 25-30 minutes).

Remove granola from oven. Let cool completely before serving or storing. Can be stored in an airtight container for up to 1 month.

Note: I added a few more coconut flakes for the last 5 minutes of baking to lighten up the colour. 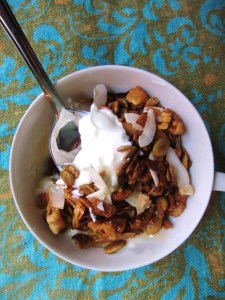 5 thoughts on “The Deep Freeze”