It’s been a little over two weeks since I’ve arrived back from Barcelona – land of impeccable taste in eyewear, graceful architecture, and some of the most well-manicured public gardens in all of South-Western Europe. It’s also home to an inordinate number of men – gentlemen, really – with very high sartorial standards, especially those having reached the salt-and-pepper ranks of manhood. Holy Toledo, espadrilles never looked so good.

That said, not even a well-groomed, tanned Iberian man in a linen suit can distract me from good food, which, luckily, is also plentiful in Spain.

When it comes to food, Barcelona excels at many things, but there a few things that were especially memorable – the beautiful, unrefrigerated eggs and rosy Saturn peaches from the market; the honeyed coca flatbread and peppery Manchego cheese, sold by the pound; the dense potato omelettes, creamy béchamel croquetas, and sandwiches with tomato-rubbed bread (Pa amb tomàquet) at the tapas bars; the saffron-infused paella, dotted with shiny black mussels and rosy prawns, still in their shell.

These are the edibles that left their mark.

Of course, there is one additional thing that Spain does particularly well and that is, beyond a doubt, cured meat. Every sandwich I ordered from the moment I stepped off the plane until the moment I stepped back on included some version of cured pork – each of them as delectable as the last. The chorizo at the Boqueria market was so good I nearly wept. I am not ashamed to admit that in seven days I ate my weight in Iberian ham, or that it took a whole afternoon to talk myself out of trucking an entire leg of Pata Negra and a dozen chorizo sausages with me on the plane home. If the sheer absurdity of arriving at the airport with a suitcase brimming with pork products wasn’t enough to dissuade me, my brother (and travel partner) kindly pointed out that the risk of being handed a hefty fine at customs wasn’t worth it (a cautionary piece of advice that lost all its weight when we were handed that miserable, cellophane-wrapped “Asian-style chicken” on the plane – a reminder that there is so much bad food out there that the feat of smuggling a few pieces of hand-crafted cured meat would have been VERY much worth the risk of getting the stink-eye from the authorities.)

Suffice it to say that Barcelona had several shining food moments – some while eating out and others from meals put together at the apartment (despite the sad use of dull, dull knives). There are many more that I’d love to share with you, but I’ll cap it here and spare you the detailed play-by-play of my Spanish food escapades, which, let’s be honest, would be the equivalent of gathering you round for an infernally-long slideshow of blurry vacation photos, charming only to the person manning the projector.

Instead, I have put together a quick slideshow of some highlights (plus an little Spanish omelette recipe further below). Buen provecho.

Preheat the oven to 400°F. Beat the eggs in a medium-sized bowl and season with salt and pepper; put aside.

On the stovetop, heat an ovenproof skillet. Add a small glug of olive oil to coat the pan. Add the shallots and allow to cook for a couple of minutes until they begin to golden. Remove from pan.

Add the potato slices to the skillet and spread them so that they lay across the pan uniformly. Allow the potatoes to cook through, turning once (3-4 minutes if sliced finely). Remove from pan when they begin to brown.

Making sure you still have a bit of grease clinging to the skillet, pour the beaten eggs into the pan, then add the cooked potato slices and onion, arranging the pieces evenly. Place in the preheated oven until the omelette has fluffed up and is golden brown on top and just set in the center (depending on your oven, you may want to set it to broil for the last 30 seconds to finish browning the top). Sprinkle the Manchego over the omelette straight out of the oven. 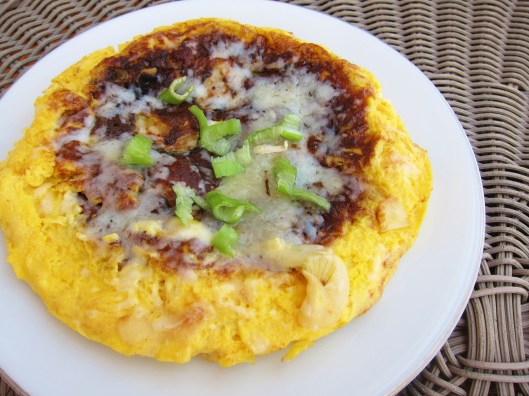